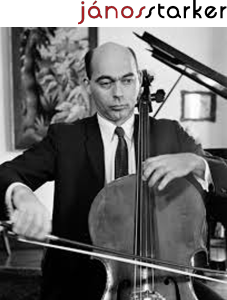 Janos Starker’s teachings encompass the most comprehensive and complete instruction to music making on a stringed instrument that I have ever observed.  While he is widely recognized internationally for having been one of the major contributors towards raising the standard of cello playing in the 20th century, for his organized approach to cello playing, and for having helped to identify and solve the physical ailments of countless string players of every physique and technical background, these great achievements are only components of the very essence of his teachings that lead to the ultimate goal – the complete marriage of mind, body, and soul put into the service of music.  While the goal can be achieved through innumerable approaches to the cello it is my view that the goal is most efficiently achieved through instrumental playing rooted in the science of the human body and its functions.  Although instrumental playing cannot be the musical means in and of itself it provides the missing link between the creative process and musical execution offering the string player limitless options while providing the best opportunity towards longevity of playing through healthy playing practices.

Janos Starker’s teaching genius lies in his ability to teach people from all walks of life on all levels – from beginners to the most sophisticated players and artists, based on more than a lifetime of innovative teaching and performance at the highest level.  His instruction appeals to all of the senses through articulate explanations and vivid demonstrations that continuously draw the connections between the rules and regulations of music making – in accordance with the designated musical language and style – and the realization of music in the never ending search for possible solutions to musical problems through instrumental playing.  Instrumental playing is not a fixed way of handling the instrument.  It is merely an approach to playing that, when both employed in union with and executed as a consequence of musical thought, provides for limitless expressive possibilities.  However, it is the rules and regulations of music (and thus of nature) that govern instrumental procedure.  Thus, true musical freedom is achieved through the discipline of mind and body.

I am personally grateful to Janos Starker for having liberated me from my talents so that I could be the musician that I have chosen to become.  His teachings along with that of a few other great teachers have continuously propelled me forward in my own quest for musical truths and excellence.

I feel truly fortunate to have been able to study with him (Janos Starker), and so indebted to him. I have learned and am still learning so much from him as an artist, as a teacher, and as a person. I shall try to continue spreading his great teaching as broad as possible.

I feel blessed for I have spent the last twenty-five years working with Mr. Starker. I came to study with him in 1986 and from the time we met there was a chemistry that was not to be denied. On our first meeting for my audition into his studio, he argued that I was too young for a Masters Degree as I was only 18 at the time. After intense discussions between him and our beloved colleague Helga Winold he asked, “How long are you planning to stay at Indiana University?” to which I replied, “How long would you like me to stay?” He immediately responded, “Do not make any plans…”

From our first meeting he was concerned about my development. When time came for my first lesson, it actually did not take place for he expelled me from the studio without playing a note!  As it turns out, he was trying to teach me a lesson in punctuality for I apparently missed the time that was on his lesson planner.  I did not believe I had missed my lesson time and said, “No, my lesson is now.”  To test me, we agreed to have early morning lessons to prove my commitment. On my first lesson, I brought Saint-Saens Concerto, which I had just played with an orchestra. Immediately he began to work on my overgrown ego by pointing out the many intentions of the composer I sacrificed for self-gratifying “flashiness”.  In that one lesson he taught me I had to balance the intentions of the composers with my musical persona; simplicity and purity were stronger values than overindulgence.  From that moment on he concentrated on the transparency of technique to allow my musical thoughts to develop. The rest is history, for I studied with him in the studio for the next four years and to this day I continue to learn something from him every moment we are together.

In 1993 we became colleagues at the University upon his request. We have worked side by side since, teaching, playing concerts together, collaborating in compositions, honoring great cellists and teachers for their lifetime contributions to the cello and it’s practitioners through the Eva Janzer Memorial Cello Center Foundation, and through books, and music publications.

One day, circa 2005 as it is customary every time we meet at his home, he asked what I would be playing in upcoming concerts and without any hesitation I responded that my first concert at an upcoming festival was to included the Arpeggione Sonata. I was not prepared for his reaction and story to follow: During his tenure as principal cellist of the Chicago Symphony Orchestra, Fritz Reiner asked him to play something else after two performances of the Dvorak Concerto. Starker suggested the Arpeggione Concerto written by Gaspar Cassado as he used to play it with piano with Gyorgy Sebok. Due to the Viennese rubati that make up the character of the work, the concert did not turn out as well as expected. That led to what follows. As I visited his house often at the time, knowing I was soon to perform Arpeggione, he would ask for me to play it on his cello. I always had the excuse that I already had a scotch with him and did not feel I could play. One day, he tricked me into checking his cello for he heard a buzz. As I checked the cello and had yet to have a drink he said, “Now, play the first movement of the Arpeggione.” Having yet to drink a scotch, I did not have an excuse and proceeded to play it for him. Suggestions followed of alternative fingerings and phrasings. As soon as we were finished he then said, this Friday you are coming to the house with a pianist to play the Sonata for visiting cellists from the Atlanta Symphony, St. Louis Symphony and other distinguished guests. The pressure of this will be higher that any concert you play and will prepare you for any eventualities! His concern for the welfare and playing standards of his students never ends. I cherish our conversations about life, history, cello and everything in between, for his teachings are a part of my daily life.

A moment of tense, expectant silence – to me it seemed to be an eternity. A couple of silent smoky clouds floating in the teaching room. Janos Starker looked at me in his typical manner, a gaze so full of intensity that I could feel it under my skin, followed by a shattering comment, uttered with a cool slowness and a stony, unchangeable look on his face: “if you ever play as inaccurately as you just did, I will deny ever having been your teacher.“ And again, an eternal moment of silence, this time I sat horrified in my chair, not being able to breathe or move. Silent smoky clouds.

One of my lessons in Bloomington ended this way – the Haydn D major concerto.

I was 19 and more than eager to learn from Janos Starker, whom I adored and respected endlessly, and of course I was full of pride and happiness to be part of a group of chosen students. It is easy to imagine with how much force his words struck me.

Of course he knew that and used his brilliant pedagogical skills in order to safely put me on the road, not to hurt me or cut me down.

Janos Starker was an extremely intelligent teacher who not only passed on excellent cello technique, but also had an extraordinarily caring way of guiding young people, including all psychological means and tricks. His aims were extremely high and almost impossible to reach. There always was struggle, but at the same time satisfaction as well from trying to reach the top and please the master. He set me on fire, burning with inspiration to reach his goals, to fulfill his demands.

This came to be one of my golden rules of life: “ If you want to become a musician who is characterized by individuality and true expressiveness, you have to train yourself, your muscles, your brain, your imagination, your ears, your taste on the highest level and in all dimensions of self-criticism and experience, so to eventually let your soul shine through. Music exists to touch and deeply move, not simply to show off or try to be everybody’s darling. Don’t get lost in being an actor on stage, showing how exciting and fantastic you are; create excitement for the audience but stay behind modestly with a cool and controlled mind.”

Janos Starker was an elegant human being and musician, full of honesty, dignity, responsibility, famous for his unforgettably subtle humor, loving, caring, guiding, demanding. His purity of tone and phrasing overwhelmed. He taught me love and respect for mankind and music. He woke up my senses, planted seeds for my entire life. He helped me organize and discipline myself, taught me to analyze and enjoy, to find my own frame looking for solutions and making decisions.

I feel endlessly privileged to have received the most precious of gifts – to know him, to have crossed his path, learned from him. Logically, it is now my turn and responsibility to carry his unique heritage to the next generation.