One of the most common problems encountered by string players in virtuoso pieces is the coordination between the bow strokes and the left-hand fingers in fast running-note passages (passages consisting of mostly the same note values), especially when the majority of notes are played with separate bows or with a few small slurs thrown in. Examples of these types of passages abound—they include sections from the Finale movement of Wieniawski’s Violin Concerto in D minor, several episodes and the entire coda section of Introduction and Rondo Capriccioso by Saint-Saens, the majority of the Allegro movement from Kreisler’s Preludium and Allegro, and many, many other pieces.

Without proper coordination training, playing these passages can create a feeling of the two hands “chasing each other”—and getting tangled up in the process. In my experience, there are three main reasons for this common problem:

The first issue results from an instinctive drive to think of the notes you are playing, hence focusing mostly on the left-hand finger motion, which invariably leads to the left hand being slightly ahead of the bow during separate-bow strokes. However, since the sound is produced by the bow, it is the right hand that is responsible for the correct timing of attack for every stroke. Thus, your attention needs to be focused mostly on the bow stroke, letting the left hand fit in to the rhythm—a relatively easy mental trick to master, even though it can feel a bit strange at first.

The second issue is related to the first, and can be solved with a similar mental approach—only one hand at a time should be responsible for articulation. Thus when notes are under a slur, they need to be articulated by the left hand. However, during separate bow strokes, the bow is responsible for articulation, and so the left-hand finger motion should be as light and minimalistic as possible. In fact, if you take a passage normally played with separate bows (e.g. spiccato stroke), and instead play the same notes under long slurs while still using the same left-hand finger motion as you would originally, the passage should sound very blurry and unarticulated.

The third issue can be worked on by training your mind to think ahead in short patterns (bursts) of notes. This is accomplished by practicing the relevant passages in “broken rhythms,” or inserting two rests of the same rhythmic value as the notes of the passage between each consecutive note in a beat. For example, if a passage consists of quadruplets, we would get four patterns of sextuplets (as in Ex. 1 from Preludium and Allegro, p 60). If the original passage consists of sextuplets, we would get six patterns of octuplets (see Ex. 2 from Introduction and Rondo Capriccioso). 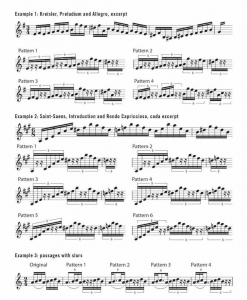 There are a few ground rules for practicing broken rhythms that need to be followed in order to get maximum results:

Afterward, run through the passage at (or near) tempo, and in the original rhythm. If you have practiced the patterns correctly, you should now feel the whole passage settled, as if you are playing it at a slower tempo, with each note sitting firmly in its place like eggs in an egg carton.

Practicing in broken rhythms is not only helpful for learning a new passage, it is an excellent way to maintain quality when practicing an “old” piece. It can even be used as a meditation-like device to calm your nerves before a performance—practicing a couple of passages in broken rhythms backstage can give you a sense of clarity and control before walking out onstage.