Muzak For Four Cellos is a set of five short individual movements written for cello quartet. They can be performed as a set or individually. The parts are written so that the first cello is the most challenging and the fourth cello part is the easiest, however all parts share equally important melodic, rhythmic, and expressive roles. The music though modern, has it’s roots in tonality. The five movements explore various textures, colours, and compositional techniques that are fun, challenging, and exciting to play. All movements are available for listening on Soundcloud. 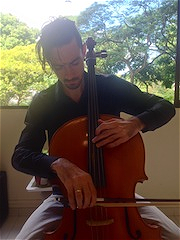 Brian Bromberg is an avid performer, composer, and listener of new music. He attended Otago University in New Zealand where he earned a Master of Arts degree in Cello Performance and Music Composition studying with Anthony Ritchie and Gregory Hamilton. Through his study of conducting Brian developed a love for teaching and coaching chamber music. Brian’s passion for performing, creating, and promoting new music led to his founding of ShanGORIL La Records in 2013, a record label that recently put out its 16th release.   Brian is currently playing with orchestras and chamber groups in Singapore, performing regularly with Gamelan Singa Nglaras, and teaching guitar and cello.