A couple of years ago, after a difficult time, I started meditating.  As I breathed mantras and sutras day in and day out, one morning I awoke suddenly from a trance upon hearing the word “LEMURIA…” being whispered into my mind’s ears.  “Le-what???” I thought.  Had I read this word somewhere? Was it stuck in my subconscious mind, or was I having some kind of epiphany?

Though I will never know what truly happened, that Le-what word quickly made its way to my google search bar.  I was immediately intrigued by this hypothetical lost land in the Pacific Ocean called Lemuria (or MU); populated by beings who had super powers; psychically evolved and overzealous protectors of nature and their land — which sadly was engulfed by giant tsunami waves that came down sending their home into oblivion, sinking so low into the depths of the Pacific, there are no traces to be spoken of.  No ruins, nor substantial scientific argument means no proof that they ever walked the Earth. But, let’s assume they did, and presume that these otherworldly beings knew the end was coming (because smart, magical people know stuff).  I’m convinced they knew about the ocean rising situation way before it happened, they knew about the potential annihilation of their home and people, so they hurried up, packed up, and evacuated MU before the waters came crashing down, scattering themselves into other territories in the vicinity.

This is how my piece Lemuria, The Lost Continent, was born. A 20 minute work scored for two cellists, percussion and cello choir told in five movements, each painting a different scenario of to the Lemurian story, lifestyle and allegedly influence on the people and cultures they came into contact with.  Every connection presented here is the result of a sizable research I did, by examining works by British occult writer James Churchward; amateur archeologist Augustus Le Plongeon and the writings of psychic Edgar Cayce. Naturally, each of these men offer quite unique perspectives on the subject, and were unanimously ridiculed by the entire community of Academics and scientists of their time… But mockery aside, all three devoted their entire lives believing and working to prove that their theories about Lemuria were true, and that in itself is fascinating enough.

Pacific Motherland, the first movement, begins with sounds of crystals, gongs and string harmonics; a musical mention to the Indian Naacal tablets that depict a theocracy of sun-worshipping priest-kings with high levels of spirituality linked the the Lemurian civilization.  The second movement, Lemurian Traces, begins with a bird motif – symbolizing spirituality – which connects with a parallel drawn between a Pre-Spanish Aymara Indian dance from the High Andes of Peru bearing great similarity in gestures, movements and attire to a Chinese ceremonial dance dating to the Qin dynasty: all of which inspired me to write a chant-like melody in an invented language.  Movement III, Seafarers, journeys into their passion for adventure, advanced oceanic and weather technology found as hypothetical evidence in the mysterious ruins of Nan Madol and Easter Island, the latter which is home to the famous colossal stone statues. Movement IV Sacred MU, was inspired by my readings on Edgar Cayce, a 19th century Kentucky born psychic known as the “Sleeping Prophet” who cured his clients’ from psychosomatic conditions he believed were carried over millennia of re-incarnations of bad karma coming from the poor souls hailing from the power hungry, war ridden Atlantis. It makes sense, because according to everything I read, Lemurians were far too evolved to hang out in the Earth plane.

The last movement, Lemurians in America, is an homage to the Indigenous people of the Andean or the Pacific coast of South America, the Chumash Indians of Southern California; the Ute Indians from Utah who revered (MU)-sinia as their sacred white mountain; the Salinen Indians whose myth about a civilization that perished in a deadly flood resonates with the tales of Lemuria; the volcanic Mount Shasta, believed to be the only dry land to have survived a worldwide flood, and in sum, the development of Mesoamerican civilization until waves of immigration from the East. And speaking of flood, there is no deadly fire, thunderous ending, nor destruction by tsunamis.  Great flood tales exist in almost every culture,including Malaysia’s Great Flood story that pre-dates Genesis and Plato; which means, ending this piece in tragedy would have been quite badly obvious.

So… The piece ends on a positive note.  It celebrates the Lemurians, whoever they might be or have been, it honors their paradise, wealth and abundance, writing, sailing, astrology and medicine advancements, magical powers, music… Apparently, they were musicians too.
As a curious side note, I discovered there’s this amazing healing crystal, called Lemurian Quartz which is used for healing and meditation work…And guess what? They were originally found in Brazil. 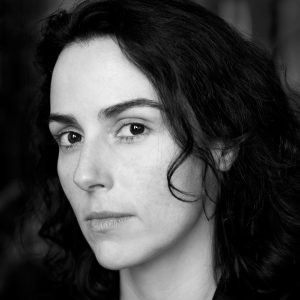 Clarice Assad’s 2018-19 season takes her throughout the U.S., to Brazil, Denmark, France, Italy, Poland, Scandinavia and the UK, and includes multiple world premieres, commissions, recordings and new performance collaborations in addition to solo and duo and ensemble concerts. Winter/spring 2019 features six commissioned world premieres: Lemuria for Left Coast Chamber Ensemble; a new vocal work for the New York Festival of Song; a new chamber work for the SOLI ensemble; Imaginarum Suite for the Boston Youth Philharmonic; Kaleidoscope for marimbist Mike Stoltzman at Carnegie Hall’s Weill Hall; and a Youth Choral work for Cincinnati’s May Festival. Additional spring highlights include concerts with Kinetic Ensemble and Aperio and Assad’s father, guitarist Sergio Assad. The first half of Ms. Assad’s 2018-19 season included two world premieres: Concerto for Two Guitars + String Orchestra, commissioned by Poland’s Tichy Music Festival; and Metamorfose for Viola and Piano for violist Matthew Lipman, which he performed on the Chamber Music Society of Lincoln Center’s The Art of the Recital series in New York City.  The Chicago-based dance company Cerqua Rivera toured her collaborative ballet, Sin Fronteras, throughout Illinois. Ms. Assad also performed in concert with the Pandeiro-Repique Duo in Chicago; at Caixa Cultural Fortaleza in Brazil; in duo recital with guitarist Micael Chaves in Paris, France; in solo recital at Italy’s Teatro dei Segni (Medina) and with guitarist Paolo de Stefano from the ETERNA duo at Teatro Comunale di Russi; at Polands’s Tichy Music Festival with the Brasil Guitar Duo;  in a three-city concert tour of Denmark and Skandinavia with bassist Thomas Fonnesbæk; and in a US tour with the Assad Family. Voxploration residencies included the Royal Conservatory of Brussels and Florida’s Valencia College. Upcoming 2019 engagements include a world premiere of a new work for piano, scat singing, and trumpet commissioned by the International Composers Guild that will premiere at the 2019 International Trumpet Guild Conference in Miami, Florida. Four recordings featuring Ms. Assads works will be released in 2019, including two CDs featuring recent commissions on Cedille Records:  the recording premieres of Metamorfose on violist Matthew Lipman’s debut album, “Ascent” on February 8th, and Sin Fronteras, a symphonic overture for the Chicago Sinfonietta on their latest CD, “Project W – Works by Diverse Women Composers” on March 8th. A prolific Grammy nominated composer with over 70 works to her credit, Clarice Assad’s numerous commissions include works for Carnegie Hall, the Chamber Music Society of Lincoln Center, Orquestra Sinfônica de São Paulo, Chicago Sinfonietta, San Jose Chamber Orchestra, the Boston Youth Orchestra, General Electric, Sybarite5, Metropolis ensemble, the Bravo! Vail Music Festival, Queen Reef Music Festival and the La Jolla Music Festival, to name a few. Her work Danças Nativas was nominated for a Latin Grammy for best contemporary composition in 2009.  Her compositions have been recorded by some of the most prominent names in the classical music, including percussionist Dame Evelyn Glennie, cellist Yo-Yo Ma, violinist Nadja Salerno-Sonnenberg, and oboist Liang Wang. A popular recording artist, Ms. Assad has released seven solo albums and appeared on or had her works performed on another 30. Her music is represented on Cedille Records, SONY Masterworks, Nonesuch, Adventure Music, Edge, Telarc, NSS Music, GHA, and CHANDOS.