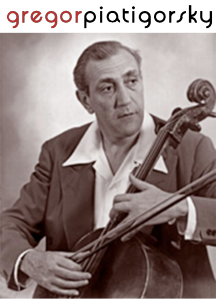 Piatigorsky’s formal training was of limited value as he was basically self-taught. His teachers included Alfred von Glehn (student of Davidov, the father of the Russian School), Brandukov (Cossmann and Fitzenhagen), and briefly with Hugo Becker (Piatti and Grutzmacher) and Julius Klengel — both in Brahms’ circle.

From 1929 on he was exclusively a soloist and was enormously successful. He performed with all the great orchestras and conductors of the era and many composers wrote enduring works for him including Stravinsky, Hindemith, Prokofiev, Milhaud, Martinu and Walton.

Piatigorsky moved to America in 1939, becoming a US citizen three years later.

He lived first on some property he had bought in the Adirondacks (and helped found the Meadowmount School with Ivan Galamian), then moved to Philadelphia (where he succeeded Feuermann as cello professor at Curtis), and finally settled in Los Angeles in 1950, where he taught with Heifetz and Primrose at USC. He was a dedicated teacher, and the quality of his studio was legendary. His pupils included Lorne Munroe, Mischa Maisky, Nathaniel Rosen, Stephen Kates, Paul Katz, Lawrence Lesser, Dennis Brott, Rafael Wallfisch, Leslie Parnas, and countless others.

There are too many highlights in his career to mention them all. His annual tours took him throughout the world, appearing with the greatest orchestras and conductors of the time. He made the first recording of the Shostakovich Sonata, collaborated with Stravinsky on his Suite Italienne, premiered the Hindemith Concerto of 1940 and Sonata of 1948, and commissioned or premiered many other works including the Walton Concerto in 1957. He was also a prolific arranger, and many of his transcriptions are published and performed the world over.