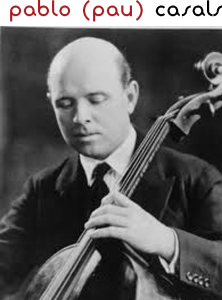 “The man who works and is never bored is never old. Work and interest in worthwhile things are the best remedy for age.”

“On my last birthday I was ninety-three years old. That is not young, of course. In fact, it is older than ninety. But age is a relative matter. If you continue to work and to absorb the beauty in the world about you, you find that age does not necessarily mean getting old. At least, not in the ordinary sense. I feel many things more intensely than ever before, and for me life grows more fascinating.”

“In spite of their age, those musicians have not lost their zest for life. How does one explain this? I do not think the answer lies simply in their physical constitutions or in something unique about the climate in which they live. It has to do with their attitude toward life; and I believe that their ability to work is due in no small measure to the fact that they do work. Work helps prevent one from getting old. I, for one, cannot dream of retiring. Not now or ever. Retire? The word is alien and the idea inconceivable to me. I don’t believe in retirement for anyone in my type of work, not while the spirit remains. My work is my life. I cannot think of one without the other. To “retire” means to me to begin to die. The man who works and is never bored is never old. Work and interest in worthwhile things are the best remedy for age. Each day I am reborn. Each day I must begin again. For the past eighty years I have started each day in the same manner.”

“It is not a mechanical routine but something essential to my daily life. I go to the piano, and I play two preludes and fugues of Bach. I cannot think of doing otherwise. It is a sort of benediction on the house. But that is not its only meaning for me. It is a rediscovery of the world of which I have the joy of being a part. It fills me with awareness of the wonder of life, with a feeling of the incredible marvel of being a human being. The music is never the same for me, never. Each day is something new, fantastic, unbelievable. That is Bach, like nature, a miracle!”

“I do not think a day passes in my life in which I fail to look with fresh amazement at the miracle of nature. It is there on every side. It can be simply a shadow on a mountainside, or a spider’s web gleaming with dew, or sunlight on the leaves of a tree. I have always especially loved the sea. Whenever possible, I have lived by the sea… It has long been a custom of mine to walk along the beach each morning before I start to work. True, my walks are shorter than they used to be, but that does not lessen the wonder of the sea. How mysterious and beautiful is the sea! how infinitely variable! It is never the same, never, not from one moment to the next, always in the process of change, always becoming something different and new.”

“I see no particular merit in the fact that I was an artist at the age of eleven. I was born with an ability, with music in me, that is all. No special credit was due me. The only credit we can claim is for the use we make of the talent we are given. That is why I urge young musicians: “Don’t be vain because you happen to have talent. You are not responsible for that; it was not of your doing. What you do with your talent is what matters. You must cherish this gift. Do not demean or waste what you have been given. Work — work constantly and nourish it. Of course the gift to be cherished most of all is that of life itself. One’s work should be a salute to life.”

Much has been written about Casals, but it is from his records and films that his alive and joyful music-making may be experienced. In his own words, he was a simple man, but it was a simplicity and quiet dignity of a man who spent his life searching for clarity of thought and all that was natural and in tune with his own integrity. He felt that all he had done was to take those gifts which were given to him and develop them as fully as he could. This was perhaps one of the most valuable lessons one learns from him as a student–that there were no secret formulas to developing as a cellist and musician, but that one’s primary concern was to find those qualities which are uniquely one’s own and allow them to grow. To spend time with him or to share in his music-making was to experience the renewal of love and of life which was the source of his inspiration.
–Written for a concert in Tribute to Casals in November, Bonnie Hampton – 1973

What was the source of Casals’ genius? On some levels it is very difficult to have a definitive answer because everything he did as an artist and cellist was so “natural”. And the important word here is “natural”. This was a word which he used so many times in lessons for both musical and cellistic reasons. He would point to “Nature” as the elemental source of guidance for our imagination musically. Always changing, always alive – elemental. And indeed, his own musical responses could be so many things – great beauty, intensity, volcanic energy (as in the c minor Suite), humor, charm, enormous sensitivity, elegance, always the essence of the musical experience of the music. But again, it is difficult to write about Casals because the answer is illusive. He had a balance of intellect and emotional responsiveness, that balance of character, talent and culture.

I want to try to write about some of the Cellistic Basics which I received from him in lessons. These were intensive lessons in the late 50s and then through the 60s, when I would have the chance to play for him while participating in the Casals Festival in Puerto Rico or at Marlboro.

As a teacher he was very focused, kind, patient, but insistent and willing to stay with a point until one got it and it was understood. Intonation was conceived in terms of tonality and the attraction of intervals harmonically. Half steps and sharps and flats were affected by the notes around them – expressive intonation when playing melodically, but within the key structure. Chords, however, needed to be more tempered. Intonation was a crucial element in his work.

The vibrato was an expressive function of the music. Therefore, one needed the ability to have the control of every color, width, speed of vibrato, always coming from the center of the note – not on top of the note, but “in” the note. One’s vibrato needed to come from the true center of the pitch.

This brings us to basic sound and tone quality. His Bow Arm was a perfection of balance and form, with every joint free and supple, but also with the source of energy coming from the back. He worked with the natural overtones of the instrument.

Therefore, we have the three elements working together for the sound – the true pitch, the centered vibrato, but most important, the flexible, free bow arm which is releasing the open sound of the cello. His sound was unique, that “Golden Sound”, which expressed his own musical voice on the cello. Indeed, that is the quest for all of us. To find our individual voice with the instrument.

Casals’ left hand was enormously alive with a spring in the articulation of the fingers, but also with a free thrown strength. Again, a resilient strength, as with the Bow. The clarity of his articulation was remarkable, but also, I feel that there was an element of clarity in the fingers of his bow hand as well, which gave him that remarkable clarity and ring in the sound. He could play with great calm and serenity but also with volcanic strength and temperament, but always this was without physical tension of any kind.

One lesson, he asked me to play a C# minor scale – he was a great believer in scales and arpeggios. When I got back to the tonic, he started giving me intervals to be played all over the cello, i.e. two octaves and a tenth, then the next one, etc., notes in every register and string on the instrument. In other words, know every note on the cello and be able to put your finger right on it. He not only used left hand extensions in the lower register, but in the higher positions as well, avoiding unnecessary shifts. Some of his fingerings were unusual, but they always served the phrasing and often worked extremely well for clarity.

Over the years, I studied all the concertos, the Bach Suites and many sonatas. He felt that the early Italian sonatas were excellent for developing the technique needed for the Classical and Rococo style. Also, the small concert pieces for which one needed to bring an artistry and imagination to make them special. He talked about the use of the Bow in the Beethoven sonatas – that they demanded a special technique of their own to meet the natural articulation of the piano with its immediacy of sound.

Always he would stress the Character of the music one was playing – find its own essence and “say it” – never just notes – but always saying something. Develop a true critical listening sense – hearing oneself as it is and keep working toward that perfection.

And indeed, he was a perfectionist. Nothing was halfway or “about”. Every note is important within its context, but at the same time with the overview and concept of the whole work as crucial. He would often say “non retard – in tempo” with the larger structure and pacing as fundamental, but there was also flexibility.

While I am writing in generalities, all of these things came within the context of studying the music. He would show the ways of finding the goals, and most important, how to work them out.

There were wonderful moments when one heard his special artistry, and also the amazing facility and ebullient joy of his playing. Sometimes in performances, there was an incredible spontaneity, as if one were hearing the music for the first time, but that came because he had lived and thought every note.

His was a remarkable life in music. While in the context of the history of the cello, there had been many fine cellists before him, but Casals opened a whole new Era; a complete Musician and Artist; cellist, composer, conductor, pianist, teacher, showed us new levels and possibilities in our musical and cellistic journey. He was a humanitarian. He gave such a gift of insight and experience into the striving for the highest truth in this world of music.