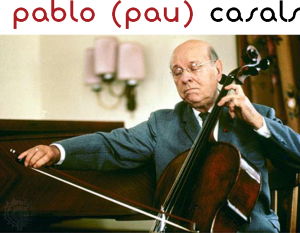 Pablo Casals was born on December 29, 1876, in Vendrell, in the Catalonian region of Spain. He was the second of eleven children of Carlos Casals and Pilar Defillo de Casals. Casals’s father, Carlos, was a carpenter and the local church organist, and would play the piano while baby Pablo rested his head against the instrument and sang along. By the age of four, Casals was playing the piano, and at five he joined the church choir. By six, he was composing songs with his father, and by the age of nine, he could play both violin and organ. At ten years old, Casals began his life-long practice of starting each day with a walk, taking inspiration from nature. Upon returning home, he would play two Johann Sebastian Bach works on the piano.

Discovers the Cello
Casals became interested in the cello after hearing the instrument in a recital he attended at age eleven – he must have had a passionate reaction to the instrument, for soon after, his father built him one. His parents argued about his future­ ­– his father wanted him to study carpentry, but his mother would not hear of it and enrolled him in the Municipal School of Music in Barcelona. Casals clashed with old-fashioned, strict instructors, and insisted on playing cello in his own, more expressive manner. This “new” way of playing revolutionized cello performance, and thus Casals single-handedly made the cello a more popular solo instrument.

Among the many impressed by Casals was the Spanish composer Isaac Albéniz (1860–1909). After hearing Casals play, Albéniz wrote a letter of introduction to Count Guillermo de Morphy, secretary to the Queen Regent of Spain, Maria Cristine. In 1894 Casals traveled to Madrid, Spain, and gave concerts for the queen and her court. Over the next few years his reputation spread, and with the huge success of his formal 1899 solo debut in Paris, Casals’s career was assured.

Discovering the Bach Cello Suites
In 1890, while Casals and his father were browsing a Barcelona bookstore, Casals stumbled upon a volume of Bach’s Six Suites for Solo Cello. Previously considered merely musical exercises, Casals immediately felt their profound musical depth, and practiced them every day for a dozen years before first performing them publicly. He then continued to play at least one suite per day for the rest of his life.

Casals’ performances of the suites shocked listeners by correcting the previously held belief that Bach’s unaccompanied music for strings had no warmth or artistic value. Casals’s love of Bach’s music carried over into the rest of his life.

Casals Silences His Cello In Protest
“I am everyday more convinced that the main-spring of any human enterprise must be moral strength and generosity.” Casals came to understand the suffering of the poor as he walked the streets of Barcelona and he vowed to use his music to help his fellow people. Casals wrote letters and organized concerts on behalf of the oppressed, and he refused to perform in countries such as the Soviet Union, Germany, and Italy, where, in his view, governments mistreated their citizens. After the brutal Spanish Civil War (1936–39), when General Francisco Franco took dictatorial control of Spain, Casals went into self-imposed exile and announced he would never return to Spain while Franco was in power. He settled in Prades, France, and gave occasional concerts until 1946, when, to take a stand against tyrants such as Franco, Casals vowed never to perform again.

Persuaded by friends, however, Casals resumed playing in 1950, participating in the Prades Festival, organized in Prades, France, to honor Bach. At the end of the festival and in every concert he was to give after that, Casals played the Catalan folk-song, “Song of the Birds”, to call attention to continued oppression in Spain. In 1956, he settled in Puerto Rico, where he started the legendary Casals Festival, which attracted the great artists of the world, led to the creation of the Symphony Orchestra of Puerto Rico, and a music conservatory on the island. Just short of his 97th birthday, Casals died October 22, 1973, having never returned to Spain.

Today the legendary name Pablo Casals evokes homage among musicians old and young, the world over.  What is interesting about the great Catalan’s career is that had it not been for Alexander Schneider, second violinist of the Budapest Quartet, he would have become little more than an historical footnote.  An important footnote, to be sure, but nothing close to the near-deity status he still enjoys among cellists, particularly in this country.  Casals played his last professional concert in the U.S. in the 1920’s.  He was active in the 30’s, but did not visit these shores.  After WWII, he went into self-imposed exile to protest the political situation in Spain.

Thus, in America, by 1950, very few non-cellists had heard Casals’ name and only a handful of people had ever seen him play.  His time in the spotlight appeared to be over.  But that year, the bicentennial of Bach’s death, Schneider moved heaven and earth to 1) persuade Casals to take part in a Bach festival to be held in his little French village and 2) persuade Columbia Records to sponsor and record concerts there.  The resulting publicity (Columbia wanted the records to sell, after all) and the renewed contact great musicians had with Casals sparked a tremendous second career even though he was by then far past his prime.  But between chamber music, conducting, and masterclasses, he stayed continuously before the public, his legend growing yearly, until his death in 1973 at age 96.