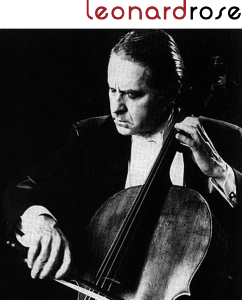 Leonard Rose taught me so much that it’s difficult to summarize it in writing, let alone in a few paragraphs. The first thing that grabbed me was his exquisite tone. When I first heard it at close range, I knew I had arrived in a completely different world of music- it was a new continent for me musically and literally (having just come from Korea!)

Mr. Rose had a huge career with lots of solo and trio performances which he combined with his teaching. The fact that he was away so often on concert tours actually was a blessing in disguise for me. It allowed me time to reflect and digest what he taught. For instance, during his absence, I listened to his Schubert “Arpeggione” recording so many times (like 50?)  trying to figure out everything he did: How he would move, tempo, rubato, how he would reach from one note to another and how he’d use his bow and vibrato to create the sound he wanted to produce. Then, when he returned, he’d play the piece again, and I’d see with joy and satisfaction if I had correctly learned from the recording.

Much of what I know now about chamber music playing, I also learned from him and his class. I was helped as well by the presence of so many top class cellists and violinists, both faculty and students that were at Juilliard at that time. Mr. Rose provided such a wonderful setting for learning, and I am grateful that between his in-person teachings, he allowed us time to grow by ourselves instead of spoon-feeding us one detail after another.

Mr. Rose was kind and caring. Just before I left New York, he gave me a Vigneron bow! At that time, I didn’t fully appreciate what he was doing, but I now understand how much this generous and remarkable gesture speaks to the quality and character of the man. Leonard Rose’s even more important gifts were all that he gave to his students and the world of music, and I am so fortunate to have been one of the lucky recipients.

Leonard Rose (1918-1984) was the first American-born & trained cellist with a world class solo career.  Like Piatigorsky, Starker, and Greenhouse, his career began in an orchestra and then expanded to include all facets of the cellist’s art; teaching, chamber music, editing and arranging, touring, and recording.  At the end of his life he was making plans to assume the directorship of the Catholic University School of Music in Washington, D.C.

Rose’s many virtues included a richly-varied, powerful tone; extremely clear articulation, of both notes and phrases; and an aesthetic of deep humility to his art.  He eschewed any sort of showmanship, focusing completely on his cello craft and his musical goals.  This integrity, and the sterling results he achieved, took him to the top of his profession.  Rose’s best recordings place him amongst the greatest modern string players.  Although he made very few solo recordings in the second half of his career, he still left us with a rich trove of superbly-done repertoire from Bach to William Schuman.

Virtually all of Rose’s recordings were done during the 1950’s and ’60s for Columbia Records, then one of the premier labels for serious instrumental and orchestral repertoire.  Before Rose, their cello catalogue was extremely thin, and he filled their needs nicely, particularly in the concerto category.  He gave us superb renditions of the Beethoven Triple, Schumann, Brahms Double, Saint-Saëns, Laló, Dvorak, Rococo Variations, Faure Elegie, and Schelomo, some of them twice.  Among the conductors in Columbia’s roster were Walter, Bernstein, Ormandy, Mitropoulos, and Szell, and Rose partnered with all of them.

As fine as all of these concerto recordings are, I agree with many other collectors that Rose’s greatest achievements in the studio were his earliest, monural, sonata recordings.  In 1952 and ’53, Rose recorded sonatas by Boccherini, Sammartini, Schubert, Grieg, and Franck with the versatile Leonid Hambro (who had previously accompanied Feuermann).  The playing exemplified a brash-but-sophisticated new American style, one also promulgated by his future partner Isaac Stern.  Rose was then in his mid-30’s and at the peak of his powers.  The golden sound, the scrupulous attack and release on each note, the inevitability of the phrasing, the purity of intonation, and the bold, virile shifts, all announced to the world that a new solo artist of startling expressive powers had arrived.  Rose never surpassed what he did in those sonatas; many of the phrases are burned into my memory from the first hearing.

Rose also recorded several concertos during this pre-stereo era (Rococo, Saint-Saëns, Brahms Double, Beethoven Triple, Schelomo) which also quickly went out of print.  He re-recorded all of them later in stereo, but again, these early recordings have a freshness and brilliance that the later versions lacked.  Rose’s playing became more careful and studied in his recordings after about 1960.  The control was always impeccable, but the earlier zest and swagger were diminished (though Rose himself reportedly preferred the stereo remakes).

Most of the mono concerto recordings are unavailable today, a sad commentary on the artistic judgment of the suits at Sony (Columbia’s successor).  Other labels, EMI in particular, unapologetically offer their pre-stereo items if the musical quality merits it; Sony much less often.

None of this is to denigrate the magisterial recordings that are available.  Most of Rose’s stereo concerto recordings and a couple of the mono ones are currently in print.  In them, you will hear one of the 20th century’s great cellists with his rich, burnished sound and his close attention to every musical detail.  His Schelomo, in particular, showcases a uniquely powerful and expressive bow arm, and his Schumann Concerto is an object lesson in phrasing and style.  But all of the Sony releases are worth having.

In his later years, Rose battled cancer and nerve problems, but his musicianship and technical integrity never flagged.  He played the Dvorak Concerto with the Kansas City Symphony in 1982 when I was on the first stand, watching him from a few feet away.  Though inhibited physically, he still dug gold out of his instrument.  The passage-work was always in tune, even if not always cleanly articulated; the big melodies ached with longing; and at several points he held the entire hall rapt as he spun out a hushed phrase.  It was truly a master at work, and even more impressive given his limitations then.

Rose also achieved especially notable success with his piano trio.  With Isaac Stern and Eugene Istomin, he recorded the complete Beethoven, Schubert, Mendelssohn, and Brahms trios to great acclaim.  Theirs was the sole example of an “all-star” group that worked cordially together over many years to achieve the unanimity of approach one expects from a “professional” ensemble.  The trio to which they were often compared — Thibaud/Casals/Cortot – made marvelous music, but did so in a much more spontaneous, live-and-let-live artistic framework.  The sui generis recordings of the Heifetz/Feuermann/Rubinstein trio all came from a single week together; the group never performed in public and it’s not known if they played together at any other time. Thus the S/R/I Trio occupied a unique niche in the chamber music scene; world-class soloist “interlopers” who actually put in the work to forge a true collaborative style and vision.  Fortunately, all of their recordings are still available today on Sony, and now the complete Beethoven and Brahms Trios are available on video.

Rose’s most impressive video performance is the Beethoven A major sonata with Glenn Gould (Sony).  The collaboration is truly amazing, one of the great sonata performances ever captured on film.  Rose’s posture and approach to the instrument were emulated by countless others, not just his students, and here we can study his playing in its prime.  We can also see the reserve and formality he always exhibited, and the complete focus on producing the highest-quality music possible, with no extraneous showmanship.  The combination of the two titanic artistic personalities strikes sparks; the youthful genius playing (by memory) at the piano, singing, conducting, and generally acting bizarre, and the mature cello master, seated behind and above, looking down on his colleague with avuncular dignity.  Somehow the performance clicks on every level.  Possibly more material may be on its way as well. Slowly, this giant of the cello is gaining the recognition in this century that had faded briefly. We are all the richer for it.