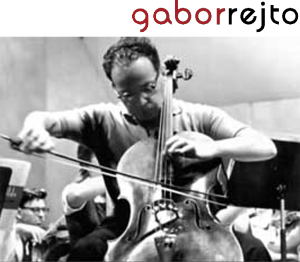 by NONA PYRON
(Founder, Director and Editor-in-Chief of Grancino Editions and Compiler and Editor of William Pleeth’s “Cello”)

I remember clearly the first time I met Gabi. He was at a hotel in Los Angeles auditioning prospective students for the Eastman School of Music, where he was the cello teacher. I was immediately put at ease by his friendly and open manner.

The following fall I found myself at the Eastman School having my first lessons with Gabi. He was a gentle, but also a demanding teacher – and he must have been dismayed at my lack of even a basic knowledge of the cello repertoire. He always joked about my audition piece, the Fantasie Hongroise by Grützmacher, which showed only too clearly my ignorance of the standard cello repertoire. So Gabi had his work cut out for him!

For three years I was with Gabi at Eastman in the winter and with him again during the summer at the Music Academy of the West in Santa Barbara. While we cellists were occasional guests at his home in Rochester, New York, in the winters, it was during the summers in Santa Barbara that I really got to know Gabi and Alice (and, of course, their two children, Peter and Sally). The Rejtos were always given one of the cottages on the campus and we reveled in the many “milkshake parties” and other fun times there. Students were always welcome and we shared many fine times – and meals – with the Rejtos.  During the summer months at the Music Academy one of our favorite past-times was playing croquet during the lunch hour – Gabi was a fiercely competitive player and we all had many good laughs together.

At the end of my third year at Eastman, Gabi announced that he had accepted a position at USC beginning in the fall. Though reluctant to leave Eastman just before my senior year, I followed him to USC along with the other cellists.

USC was a totally different atmosphere from Eastman.  Whereas the Eastman School of Music, located in a rather run-down area of Rochester, consisted of two buildings  (one six stories high and the other twelve, separated by an alleyway with a connecting bridge at the 6th story level), music lessons at USC were given in Clark House – a spacious, elegant California Craftsman style house set in elegant grounds on Adams Avenue in what at one time must have been a very wealthy Los Angeles neighborhood. The spacious foyer became a meeting place where one could encounter not only fellow students, but enjoy leisurely chats with the various professors teaching there. Those who come most strongly to mind are Gwendolyn Koldofsky, Alice Ehlers, Ingolf Dahl and, of course, Gregor Piatigorsky and Jasha Heifitz.

I remained at USC for the completion of my Bachelor’s and Masters degrees (with a year off for study in Munich, Germany, as a Fulbright Scholar) and then – thanks to Gabi, who hauled me out of the wilds of rural Mexico – was offered a position at Willamette University in Salem, Oregon and began a nine-year teaching stint there (playing in the Portland Symphony as well for the first 2 ½ years).

Later I returned to USC to complete my DMA under Gabi. I will never forget his saving hand at my final oral exam before the Dean and the assembled faculty on my doctoral committee: I was asked a question and Gabi quickly perceived I hadn’t a clue to the answer. He immediately jumped in and, thinly disguising it as a “dialogue” between the two of us, proceeded to feed me the information. I heaved a sigh of relief… until the Dean said, “That was very interesting, Gabi, but now we would like to hear the candidate answer the next question.”

Clearly, Gabi could no longer save me – but I needn’t have worried, the next question was to outline a brief history of the cello. Having spent the previous years in Europe researching this very topic, the information flowed from me like a veritable Niagara Falls – and I was home and dry! But thank you, Gabi – without your help on the first question, I might never have reached the terra firma of the second question!

Other memories of Gabi include his beautiful playing – both in his solo recitals and with the Alma Trio. Their recording of the Schubert Trio remains among my favorites. I have always been very proud to know – and be a student of – such a fine and sensitive player.

I often think of Gabi – when I am playing and when I am teaching – and am grateful for what he gave me… and, above all, for the warmth of his friendship.

Rejto’s work with me was profound. I was in the extremely fortunate position of being one of the few cellists with whom he worked from an early age. Because I worked with him from my childhood until my late teens, my formative playing years were spent learning how to produce a clean, pure tone to create honest, spoken music. Rejto stressed purity of phrasing. He taught his students to play with a streamlined, efficient left hand, and to have excellent physical balance and posture. Most of all, whatever piece or phrase you played had to mean something. He was excellent at baring the bones. He was a kind and gentle teacher; nonetheless excess for excess’ sake wasn’t tolerated. Perhaps his time with Casals was reflected in the fact that he spent a great deal of time with me working through the Bach solo suites for cello. However, the most profound memories I have of Mr. Rejto came in the “extracurricular” time we spent together socially and musically. My mother was close with both Alice and Gabor Rejto, and we were frequent guests at their home. This might mean a quiet dinner, a swim in the pool, or a chamber music reading. I have strong memories of seeing and hearing Mr. Rejto working hard in his studio, on his own, during late hours…on Bach, or on a recital piece. Somehow, these memories of his dedication as a musician shaped my approach to music making as an adult.

On the occasion of Gabor Rejto’s death in 1987, JEFFREY SOLOW delivered the following eulogy:
[also published in the Los Angeles Violoncello Society Newsletter, 1987]

After a long and heroic fight against brain cancer, Gabor Rejto died on June 26, 1987. Gabi was one of those few musicians who can truly be called “beloved”—by his family and friends of course, but also by his students and his audiences. As a performer he distinguished himself as a soloist and in the most important areas of chamber music: duo, trio and string quartet. His concert tours took him literally all over the world: throughout the United States, Canada, Australia, New Zealand, Europe, Japan and Africa. He was one of the most prominent teachers in the United States. Among his students have been his son Peter, myself, Laurence Lesser, Sharon Robinson, Matt Haimowitz, Paul Katz, Joanna de Keyser, and Stephen Geber.

Gabor Rejto was born in Budapest in 1916. After receiving his Artist’s Diploma from the Royal Academy he moved to Spain where he studied with Pablo Casals until 1936. He came to the United States in 1939 where he performed with the Lener, the Gordon and the Paganini Quartets. Gabi’s excellence as a teacher was soon recognized and he taught at the Manhattan School and at Eastman, where he headed the departments of cello and chamber music from 1949 until 1954.

In 1944 Gabi founded the Alma Trio with Roman Totenberg and Adolph Baller. He performed and recorded with the Trio (subsequent violinists were Maurice Wilk and Andor Toth) for almost forty years. In 1949 Gabi joined the faculty of the Music Academy of the West in Santa Barbara where he taught cello and chamber music for thirty-one years. From 1954 until 1978 he was chairman of the String Department at the University of Southern California where he continued to teach until his death. Gabi was ASTA’s “Artist-Teacher of the Year” in 1972 and was again so honored by the California String Teacher’s Association in 1980. He also taught at Marlboro, at Sion and at Aspen.

Besides his recordings with the Alma Trio, Gabor Rejto recorded as a duo with Adolph Baller, with his son Peter and his wife Alice, and with Heifetz and Piatigorsky. His last performance was in May of 1987—the first movement of the Dvorak Concerto with the USC Community Symphony. Gabi, we’ll miss you!