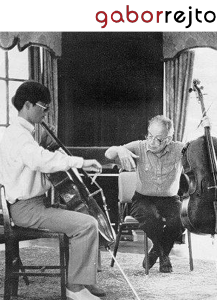 Rejto was a master technician, and spent a great deal of time emphasizing form, producing clean, linear and beautiful tone, and using both hands – but particularly the left – efficiently and effectively. He spent his childhood working with a direct descendant of the Popper tradition in Eastern Europe, and an important part of his adulthood studying with Pablo Casals. Rejto’s style was a combination of both.

Two of Gabor Rejto’s early Hungarian teachers were Frederick Teller and Adolf Schiffer – also teachers of Janos Starker. The bow grips of Rejto and Starker have much in common – wonderful agility, lightness, higher wrist and fingers with the emphasis on minimal finger motion in the bow change.

Rejto’s left hand, however, a “squared-off” position, differed from that of Starker’s “angled” position. It is possible that it was the influence of Pablo Casals.

As so many other cellists of the 20th century, Rejto worshipped Casals, spoke of him and quoted him often in lessons, and interpreted Bach very much influenced by the charisma and force of Casals’ personality.