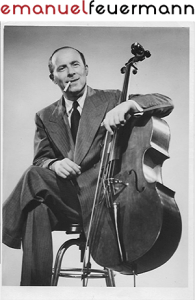 Excerpted from Annette Morreau: The Lost Genius of the Cello (The Independent, 3 Oct 2002):

“He became for me the greatest cellist of all times, because I did hear Casals at his best. He had everything in the world, but he never reached the musicianship of Feuermann. And this is a declaration.”
—Artur Rubinstein

“He was the most comfortable player up at the top that I have ever heard before or since.”
—George Sopkin

“He is an ideal that one strives towards in that kind of honesty, integrity and virtuosity.”
—Yo-Yo Ma

“I place him as the most important figure for 20th-century cello playing because he was the one who proceeded to carry cello playing as such to a higher level. If he had lived longer he would literally have taken the place of Casals.”
—János Starker

On left hand technique and shifting:

“The whole point of any technique is to make the movement from one position to another as easy as possible, with no tension and once that is found you have the beginning of a facility. If he wasn’t the first to do this, he was the one who did it most efficiently and to the point that his playing was so admired that everybody wanted to change and do it his way.” (279)
–Bernard Greenhouse

On beauty of sound and technique:

“Feuermann was for me the first one who in 1935 impressed me that this is not a cello sound. It is a beautiful sound that can be a voice or anything else. It is not automatically recognizable as a cello sound. Casals always played a cello sound wherever he played; there was no tonal distinction between soprano, baritone, bass. Feuermann was the first one to rise to coloratura soprano because of the violin.” (280)
–Janos Starker

“The solo cello of Feuermann was something which led me on to what music really means, what is has to say. It was the most masterly, most fine performance [of Don Quixote] I have ever heard and I don’t want to ever hear it again by anybody else.” (325)
–Eugene Ormandy