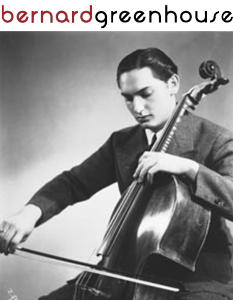 Bernard Greenhouse emphasized harnessing the body’s natural strength as the fundamental source of expressive and healthy cello technique.  Cello playing does not begin when the fingers of the left hand touch the fingerboard and as the bow sets the string in motion.  Cello playing begins in the back, before the sound.  The back unifies the specific tasks of the right and left hands, merging them together into efficiently integrated movements directed towards individual creative expression. While Greenhouse frequently spoke about releasing the weight of the left hand into the fingerboard and the weight of the right hand into the strings, he first asked his students to develop awareness of the source of that weight.  Describing this fundamental physical connection to the cello, Greenhouse explained:

. . . arm weight is not the most important thing, it’s being able to attach the weight of the arm to the spine, since the back has an enormous influence on the ease of playing, a notion I got from Feuermann and Casals. The smaller the amount of body you use, the more difficult it is to play with strength. When the back is more involved, you achieve a feeling of freedom and power that you cannot attain when you play only with your arms, hands, and fingers. The motion should start from the back, not from the arm or shoulder. When you put your finger down, for instance, it’s not the finger that is creating the strength, it’s your back that’s pulling the finger down. You should use the large muscles of your body in order to create the ease and strength. [Internet Cello Society]

SHIFTS – Anticipate and prepare shifts.  When a passage calls for a series of quick, frequent shifts such as 1-2, 1-2, 1-2-3 in a scale, practice connecting them and feeling them as one continuous fluid motion.  Recalling the ways that this technique influenced his own playing, Paul Katz explains, “it all has to do with anticipating the required motion instead of doing a bunch of quick stops and starts. Anticipating means beginning the motion earlier which results in a slower shift, rather than a quick, jammed motion. A series of shifts close together can be felt as one continuous motion. Greenhouse gave me a fluidity that I didn’t have before.”

ARTICULATION –  During his studies with Casals, Greenhouse was introduced to the role of left hand articulation in creating phrase shapes and colors. Greenhouse recalled that Casals “insisted that every note have a definite beginning, even if it was to be played pianissimo. A consonant is heard when the finger audibly comes down on the instrument, when you want the note to have a sharp beginning. A vowel is played when the finger is placed less percussively, giving the note a milder beginning. In other words, a consonant is more articulated.”

VIBRATO  –  There are multiple varieties of vibrato motion defined by its width, its speed, and whether the motion is initiated in the arm, the wrist, or the finger.  A cellist’s choice of vibrato is influenced by reflecting upon the expressive demands of the music, the string being played on and the location of the hand on the fingerboard.

Right Hand
ARM WEIGHT –  From Casals, Greenhouse integrated the technique of releasing  arm weight in his right arm as well as his left arm, unifying the feeling of both halves of the body.

TONAL COLORS – Teaching students ways to imagine and then create distinct sounds and colors was a defining quality of Greenhouse’s message to them.  Greenhouse constantly challenged his students to attend to their choices regarding bow speed, contact point, and weight in the string. The choices of how to combine these three variables are as endless as the ways in which each performer crafts their own interpretations.

Interpretation
Ultimately, the two hands work together in unison expressing the ideas of both composer and the performer.  Greenhouse reminded his students that the two hands never work separately.  Rather, the two hands respond to and support each other through the process of crafting an intelligent, personal, and compelling performance.

PHRASING –  A cornerstone of the ways in which Greenhouse drew his students out as independent interpreters grew out of Casals concept of the phrase as an “arch.”  Greenhouse recalled Casals describing how “each phrase has a beginning, reaches the top in a beautiful arching way, and then comes down to the starting point. Casals called these “rainbows.”

ARCHITECTURE –  Creating an expressive performance requires thinking about not only the unique shape of each individual phrase, but also about the relationship of phrases.  Casals regularly used the metaphor of the cellist as “architect” to convey the necessity of considering the details of each phrase within the larger structure of a piece of music.

EXPRESSION – Fundamental to Greenhouse was the ideal that the performer’s role is to take the audience on their own musical journey.  Excessive movement or displays of emotion from the performer draw attention to the performer rather than the sounds that they are creating.