Bernard Greenhouse: From Teacher to Colleague, Friend, and Always My Inspiration — by Paul Katz

Bernard Greenhouse: From Teacher to Colleague, Friend, and Always My Inspiration — by Paul Katz

It is Christmas Day 2015! Hearty Holiday Greetings to you from myself and my wonderful CelloBello staff (Jussi, Elana, Clare and Stella)!

January 3, 2016 is the 100th Birthday of Bernard Greenhouse, and in celebration of this event, it is an immense personal pleasure to be bringing you Bernard Greenhouse Tribute Week on CelloBello. From today, December 25, 2015 to January 3, 2015, we have scheduled ten days of CelloBlogs, CelloChats, seven never-before seen video conversations between myself and Bernie, photographs, Greenhouse recordings, the opportunity to ask questions online to his former students, colleagues, and daughter, Elena Delbanco… and more!

Bernie was one of my true cello heros and a man I loved and admired. Those of you who know the CelloBello.com website know that there is already a Bernard Greenhouse Legacy section—when I created the site I created CelloLegacy to pay tribute to each of my great former teachers. The videos, recordings, photos, etc., being released this week will be added to the Greenhouse Legacy and available into the future. Here is Bernie speaking in his last NPR interview:

“Mr. Greenhouse” came into my life as my teacher 1962-64, and eventually became “Bernie”, a life-long colleague and friend. As Greenhouse became increasingly revered as he lived into his eighties and nineties, I was frequently asked to write or speak about him. Some of my most intimate personal recollections I wrote in 2005, on the occasion of his 90th birthday, and I would like to repeat those words here:

I remember the magic of Bernard Greenhouse’s sound the first time I heard him (with The Bach Aria Group), in Pasadena, California, in 1961. The elegance, imagination, and perfection of his playing that night was an inspiration that has always stayed with me. Three months later I nearly had to kill to get tickets for The Beaux Arts Trio, but, like an addict still high from the first experience, I just had to hear that sound again. The Beaux Arts played the Dvorak “Dumky” and the Beethoven “Archduke” Trios that night, and the group and their cellist enthralled me. While listening to Bernie play, I made the decision that I must study with him, and the following September I arrived in New York to begin lessons with him.

For two inspiring years Bernie worked with me: “First, I am going to fix your left hand- hang your arm on the playing finger, roll the weight from the old to the new finger, soften the hand, prepare your shifts, align your fingers from the top to the bottom of the cello…” My facility and accuracy made giant strides. At the same time, he opened a whole new world of color for me: “Vary your bow speed and contact point, paint with your bow; modulate your vibrato to fit the dynamic and the character; experiment with fingerings, they are an important expressive tool! Don’t sing here, speak—don’t speak here, sing.” On and on, and the frustration I had always suffered from, of feeling something inside of myself but not being able to bring it out of the cello, began to lessen.

Bernie’s warmth, devotion and interest in all of his students was remarkable-he was both stern taskmaster and friend. In the summer of 1963, after a punishing season of touring, he finally got a few free weeks at his home in Wellfleet, MA. Of course, always the involved teacher, he invited this young California boy for two weeks of daily lessons, yachting and clam digging on Cape Cod. (I have become even more amazed by this generosity as the years have passed, for I also adore teaching and am close to my students, but I have never ever had the energy or devotion to take them with me on holiday!)

Years went by, the Cleveland Quartet and teaching became the shared passions of my musical life, and the warmth and humanity expressed in Bernie’s sound and his words of cello advice always stayed with me. What a thrill it was when we began to play concerts together! Of the numerous Schubert Quintet performances we did together, one of the most memorable was at the New York Metropolitan Museum of Art at a time that my quartet, the Cleveland Quartet, was playing on The Paganini Strads, a quartet of Stradivari instruments that had been matched, owned and played on by Paganini himself. Bernie’s own glorious Stradivari cello had the same nickname of “Paganini,” and he explained that this was because his cello had been the original instrument of the quartet! For some reason, the Paganini had sold Bernie’s instrument and replaced it with the Strad cello I was using. The Cleveland Quartet and Bernie all had goose bumps that night when the 5 instruments were reunited on stage, and of course, I got the additional thrill of playing with my former teacher.

On a more poignant note, I will never forget a recording session of the Brahms Sextets with the Cleveland Quartet, Pinchas Zukerman and Bernard Greenhouse in the late 1970′s (sorry, I’m not at all sure of the year). At the end of a grueling day, Bernie and I left the RCA studios in New York City and started up 6th Avenue together. Bernie was in obvious distress, barely moving forward, and it quickly became apparent that he was unable to walk and carry his cello. He told me it was only “a little angina,” but his labored gasps for air told me otherwise. I carried both instruments, helped him into a taxi, and fought back tears, for I was sure that he had little time left.

What could be more amazing and splendid then, almost 30 years later, in the year 2005, that I was able to read these words above to Bernard Greenhouse as we celebrated his 90th birthday!!

In his later years, Bernie spent more and more time on Wellfleet, MA, on Cape Cod, and being nearby Boston, I was able to see him more frequently. The video interviews I did with him that we are releasing for this tribute week are from 2008. In 2010, cello colleague and good friend Laurence Lesser made a visit with me to the ailing Bernard Greenhouse. Despite his need for oxygen, it was a spirited evening of good food, wine, Larry’s apple cake, and hours of Bernie storytelling. I am grateful for that evening—it was the last time I would see him. 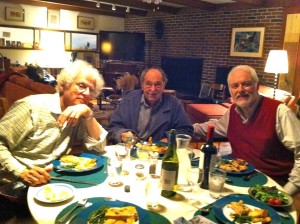 There are hundreds, probably thousands of cellists that studied with Bernard Greenhouse, that are indebted to him, love him, and have fond and heartfelt memories. And as performer and cellist of the Beaux Arts Trio, his cello playing moved decades of concertgoers and recording fans. We hope all of you will enjoy this Bernard Greenhouse Tribute Week, and that I speak for everyone when I say, “We miss you Bernie, and we Thank You!”