A Cellist in Kabul (Part 1) — by Avery Waite

A Cellist in Kabul (Part 1) — by Avery Waite

On September 4th, I packed up my things, hopped in a taxi and drove to JFK airport. My destination, Kabul. My job, the new cello teacher at the Afghanistan National Institute of Music.

When I first heard about the opportunity to teach in Kabul, I knew deep down that I had no choice but to go. Something drew me to it. I applied for the job without really thinking it through completely. But when I was actually offered the position, I had to really take a step back and give it some serious thought. In fact, it took me almost three months to fully accept the decision I had made to go. Some days I would be thrilled and excited, and other days I would be scared out of my mind. I was also very sensitive to other people’s reactions when I told them about my plan to teach in Afghanistan. Most people responded with some mixture of horror, shock and incredulity. At first it really got to me, but after a while I started seeing past it. We are all afraid of change and the unfamiliar, it’s being human.

Over time, my resolve started to strengthen, but nothing would prepare me for my last few days in New York before my departure. I wanted to savor every moment of my familiar life before it all vanished. At the same time, I was extremely anxious and subject to sudden waves of panic and emotion. Did I really want to do this? Could I live with the fact that I would be subjecting my family and my girlfriend to long hours of worry and stress? Was this what I wanted professionally? Was this really what I had been training for? There were too many impossible questions to count. After a devastatingly difficult farewell to my girlfriend at airport a few days later, I finally stepped on to the plane bound for Kabul. At that moment I was struck by the oddest feeling of profound relief. The hardest part was the waiting, it always is. 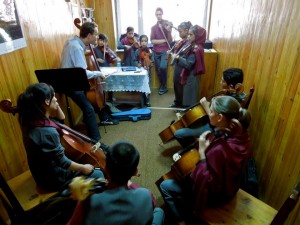 I have been in Kabul for two weeks now. Since arriving I have been so struck by the warmth of my Afghan students and colleagues. I am constantly saying hello, returning smiles, shaking hands, giving and receiving enthusiastic pats on the back. Even outside of the school, I am making new friends and am greeted with smiles and handshakes. After only a few weeks I feel like I’m right at home. On the other hand, there are other aspects of life here that will take some serious getting used to. One thing I’ve learned is that Afghanistan is a place of stark contrasts. Despite all of the chaos, there is something intensely beautiful about the place and the people.

The day after I arrived there was an attack just down the block and another just a few days ago. The suicide bombing on the 8th of September claimed the lives of several children who hung out in my neighborhood. I actually met one of them, Khorshid, the day before the attack. There was simply no way of knowing that this beautiful young girl would be senselessly killed the very next day. It really got to me and I still think about them. There’s nothing like the death of innocent children to bring the harsh cruelty of war into focus.

Due to the film, the entire Muslim world has been thrown into chaos. Despite the facts that have come to light about the filmmaker, (he is an Egyptian, not Israeli or American, with a shady past and a criminal record) the riots have only intensified. There have been demonstrations in Kabul over the past few day, which have cause all sorts of unrest and anti-foreigner sentiment. In fact, there was a security lock-down at the school yesterday and we were not sure whether we would be able to get home at the usual time. While I am deeply disgusted by the message of this film, it does not represent the American opinion of Islam—it is simply one guy’s ridiculous, low-budget movie designed to drum up hysteria and anger.

Fortunately, life at the school continues uninterrupted. The kids are absolutely wonderful. They are so eager to learn and hang on my every word like its pure gold. Speaking of words, I am picking up more Dari every day, but my vocabulary is still pathetically limited. Today, I needed to count to ten and only made it to six. After months of not having a cello teacher, my students are working hard and improving quickly. On the other hand, my double bass students, like me, continue to be bewildered by the instrument. I can now say that I have “successfully” taught a jazz bass lesson in a language I can hardly speak. I have also started assisting two of the other faculty members with their music theory and ear-training classes. Ultimately the plan is for me to teach a class or two of my own.

I am also in charge of leading a young string ensemble consisting of ten adorable young violinists, violists and cellists. After the ensemble, I coach a string quartet made up of four young Afghan girls.

I’m so excited to see where this journey takes me. Please visit my blog to read and see more!

About the Author: Avery Waite

Originally from California, Avery Waite has appeared in concert in Avery Fisher Hall, The Kennedy Center, Alice Tully Hall, MOMA, Carnegie Hall and has performed solo in Poland, Italy and France. Avery has been a featured performer on Sesame Street and was also recently selected to perform in concert with Itzhak Perlman at the 2012 Perlman Music Program Chamber Music Workshop.

In May 2010, Avery represented Oberlin Conservatory at The Kennedy Center, performing the solo works of Elliott Carter as a part of the Conservatory Spotlight Project. He was also recently selected by The Cleveland Orchestra as an Artist-in-Residence Fellow during cellist Alisa Weilerstein’s residency. Avery participated in the 2008 and 2009 New York String Seminar Program at Carnegie Hall with Maestro Jaime Laredo. A proponent of contemporary music, Avery has collaborated with many composers, including George Crumb and Charles Wuorinen, and has been featured on the Summergarden New Music Series at MoMA. A great lover of chamber music, he has studied chamber music with members of the Cleveland, Guarneri, Juilliard and Takacs String Quartets.

Avery has received grants from both Oberlin Conservatory and The Juilliard School to pursue social outreach and cultural diplomacy projects in Europe and North America. Teaming up with violist Fitz Gary, Avery also founded Music Feeds Us, a concert series designed to promote hunger relief and awareness.

Avery completed his undergraduate studies at Oberlin Conservatory in 2010 and received a Masters degree from The Juilliard School in 2012. In September 2012, Avery moved to Kabul to join the faculty at the Afghanistan National Institute of Music.