I am indebted to Aron Zelkowicz for correcting factual errors in the first version of this article, and to Peter Close for locating an on-line version of the original score.

Today’s ruminations are on Tchaikovsky.  And his congenital weakness regarding transitions.  It’s kind of endearing, that such a genius would have this Achilles’ heel; for some reason, his muse regularly deserted him when he needed to stitch together two sections of music. It could be in a placid spot, such as the transition to the jerky second theme in the first movement of the Piano Concerto 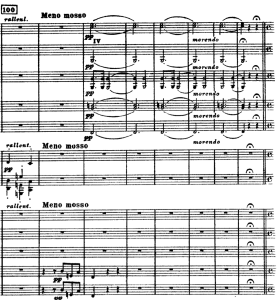 . . . or the connecting “music” preceding the waltz variation in the A minor Trio. 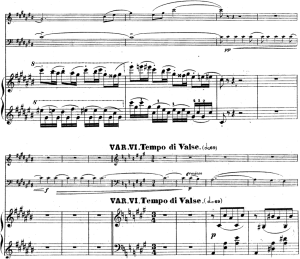 It could also be in a transition meant to increase tension, like the second return to the opening material in the finale of the Violin Concerto

. . .  or the revving up of the trills leading to the trill variation in the Rococo Variations.

In the latter situations, performers have often felt justified in giving Tchaikovsky a little “help” by rewriting the passage.  Not so much modern artists, but those who knew or had a direct connection to the composer, like Leopold Auer, or Piatigorsky (who played each little 16th-note group in a different octave in the above example).

So onto Pezzo Capriccioso,Op. 62.  The subject is rosin and the deleterious effects thereof on the fingers when trying to play.  Well, that and transitions.  Well, that and alteration.  But as to transitions, the first one in the piece is typically awkward – the cello sitting on long notes while the orchestra pulsates portentously underneath – but at least there are no performance issues:

The transition back to the lyrical material, though, (in the standard edition) presents the player with real problems: 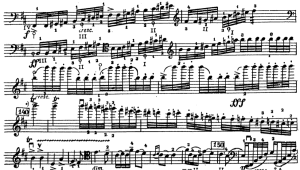 A trill on a high B, well up in rosin territory, followed by a glissando down the string can be disastrous; all gummed-up, the fingers cannot shift smoothly thereafter.  Rococo, of course, has a trill almost as high, which sounds equally ridiculous, but which is followed immediately by a rest, so the cellist can tidy up.

But in the Pezzo, the playing is continuous to the end of the piece, including both lyrical and virtuoso passages.  Rostropovich avails himself of a small ossia in the part, i.e., just repeated 32d-notes instead of a trill.  But you’re still in rosin country and there’s still the gliss.  For many cellists, this is enough to simply pass on the piece entirely.  Playing the piece as a clueless undergrad, I had no notion of any of these kinds of options and did it as written, trying to cope with the problem, which felt like running in tar.  I did experiment with different rosins to find the one that was the least dusty (and came up with Liebenzeller Meteor-Eisen II, which I’d also recommend for the Kodaly Solo Sonata).  But I am glad that no recording exists of that performance.

Well, it turns out that we’ve all been trying to play the wrong music.  The standard version, published by IMC and Schott, is universally played, including by Rostropovich.  But, just like the Fitzenhagen re-writing of Rococo, so too has Pezzo been bowdlerized by a well-meaning virtuoso cellist. The piece was dedicated to and premiered by Anatoly Brandukov.  According to Wikipedia: “Tchaikovsky wrote to him on August 25, ‘I have written a small cello piece, and would like you to look through it, and put the final touches to the cello part.’”  This Brandukov did, and his “final touches” were accepted by the composer and incorporated into the published score.  But Tchaikovsky archived his original version, which eventually appeared in an edition of the composer’s collected works.

This nastiness that has causes many of us so much trouble (m. 134-141) was all Brandukov’s idea.  The composer’s conception is pure virtuosity, but stays down in civilized areas of the fingerboard:

If you’d like to hear it, Steven Isserlis plays this version (it starts at 3:40).

Another Brandukov emendation: the version we’re all used to (m. 72-77) goes like this:

Fluent, flashy, and fun to play.  But harmonically static.  And the old man had written:

It contains more “music,” but is not as cellistic.  And, again, these changes were approved by the composer, same as the Fitzenhagen changes to Rococo.  Performing artists need to make their own personal choices about such things.

Harping again on transitions, the one discussed earlier is another ungainly one, with the trills becoming a “melodic“ bridge to the opening material. And then later, the plunge into C major, as a lead-in to the final running section, is unconvincing.  So for all its charm, Pezzo Capriccioso, written in only a week, is a flawed work by a great master, but the flaws are so charmingly typical of him.

If there is a point to this rambling essay, it would be to encourage cellists to permit themselves a modicum of creativity when (a) the material being altered is weak, and (b) when doing so solves a sticky problem (of one sort or other), but above all (c) to make sure they have tracked down the most reliable urtext in existence.

Finally, permit me to end on a note of crabbiness.  One personal bugaboo I’ve always had with this piece is the D# in m. 118 that everybody, and I mean everybody, misses (here’s 118 and 119):

By what possible analytical process could that note change into a D?  Yet that’s how everyone reads it.  I was astounded to see even the supposedly-deferential Collected Works editorializing thus:

It’s not simply a matter that in none of the original sources does a D appear, it’s that the note makes no sense!  So what if it’s easier?

About the Author: Robert Battey

Robert Battey is a DC-area cellist, teacher, writer, and clinician.

His principal teachers were Bernard Greenhouse and Janos Starker, and he holds performance degrees from the Cleveland Institute of Music and S.U.N.Y.-Stony Brook.  Bob’s career has included stints in professional string quartets and symphony orchestras, as well as many recitals and concerto appearances throughout North America.

He has served on the faculty of the University of Missouri-Kansas City, S.U.N.Y.-Potsdam, and the Levine School in Washington.  He has taught at Cellospeak and the Gettysburg Chamber Music Workshop.

Bob specializes in working with adult amateurs, and his widely-used text, “500 Sight-Reading Exercises For Cello” (available at www.cellos2go.com) is dedicated to that demographic.

A prolific writer, Bob’s articles and reviews have appeared in the Washington Post, in STRINGS magazine, and in various ASTA newsletters.