Taking it on the Road — by Brant Taylor

Taking it on the Road — by Brant Taylor

One of the most interesting and rewarding aspects of life in a major orchestra is the touring. After “What difference does the conductor really make?” and “How did the orchestra like _____?” (conductor or soloist), the questions I’m asked most frequently by members of the Chicago Symphony Orchestra‘s devoted audience are almost always about touring.

Organizing an extended trip for a large orchestra, especially abroad, is an immense undertaking. The initial planning begins years before the event itself, and all of the logistics that must be in place for things to run smoothly take the full-time attention of dedicated members of the orchestra’s administration.  There are a couple of travel companies in the U. S. who specialize in taking orchestras on tour, and the CSO uses one of these companies for assistance.  The employees of this company are well known to the orchestra after years of traveling together, and they feel like members of our extended family.

Months ahead of time, the trip comes into clearer focus. Cities that might have been on an initial itinerary may be dropped for various reasons, and others are added. Most foreign tours last between 2 and 3 weeks, and may include anywhere from 3 to 7 stops and 1 to 3 concerts in each place. (Our recently-completed European tour in September 2011 included, in order, stops in Salzburg, Lucerne, Luxembourg, Paris, Dresden, and Vienna.)  The chronological order of locations does not always make sense geographically, but cities like Salzburg and Lucerne host jam-packed music festivals every year and have their own schedules to consider. This year in Salzburg, our concerts were bookended by concerts by the Berlin and Vienna Philharmonics.

Weeks before the tour, I receive a form where I list the instrument and bow(s) I will take on the trip.  Every piece of equipment must be logged for insurance purposes.  We also receive forms listing the hotel and travel arrangements that have been made for each leg of the trip.  If necessary, our administration collects passports ahead of time so that the appropriate visas can be added for the countries we will visit.  Because traveling with a large group is not always everyone’s favorite thing to do, a musician may opt to make his or her own flight and hotel arrangements and stay where he or she wishes.

Many orchestra members travel with one or more of their family members.  Along with the orchestra staff, stagehands, and musicians, our touring group usually numbers just under 200.  On top of that, 250 wardrobe and instrument trunks weighing 20 tons make us an admittedly heavy group.  The cargo usually travels on a dedicated cargo flight, but once on the ground, two semi trucks carry everything between cities.  Our stagehands closely supervise the transport of this valuable equipment.  My cello case travels inside a large, foam-padded trunk.  Even with these precautions, and mainly because certain old instruments would be irreplaceable if an accident were to damage them, most cellists in my section have a second (usually newer) instrument that they use for tours.

We usually travel on a United commercial flight (our official airline) for our international voyages, but since the tour group is large enough to fill a narrow-body jet such as the Boeing 737 or Airbus A320, we typically use a chartered aircraft to travel from one city to another once we’ve reached a general destination such as Europe, Asia, or South America.  Before 9/11, our buses were often allowed to drive up to the plane on the tarmac, making the boarding process very easy, especially with no assigned seats on board.  These days, however, everything seems more complicated, and the check-in process for 200 people is never quick.  Things are usually better once we’re airborne.  Charter flights in particular can be highly amusing, with some of my entertaining colleagues taking the on-board microphone to tell the group stories, do spot-on imitations of conductors, and otherwise take advantage of the opportunity to perform something other than their usual parts.

The daily schedule on tour varies greatly depending on several factors, not the least of which is the conductor who is leading the tour.  While one (Barenboim) prefers not to over-rehearse on tour, leaving much to the inspiration of the moment in concert, another (Haitink) requests more rehearsals to get our ears used to each new hall.  One (Muti) doesn’t mind traveling early in the day and playing a concert that same evening, while another (Boulez) avoids that, thereby averting the complications that could arise from a flight being delayed on the day of a concert in another city.

The cities around the world that are willing and able to host a big American orchestra on tour are, fortunately, usually spectacular places to visit.  Sometimes we have time to look around and enjoy the unique scenery and culture of a destination, and other times not.  It’s a business trip after all, and the quality of every concert we play is of great importance to the orchestra (obviously whether we are at home or on a trip).  We typically have a photographer with us on tour, and sometimes a critic from one of our hometown newspapers will come as well, posting daily updates about the orchestra’s activities.  Many of our devoted fans at home in Chicago closely follow the photos that are posted each day on the orchestra’s Facebook page and website: 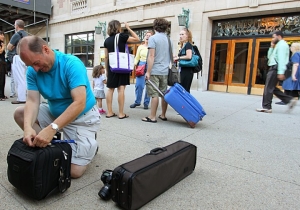 Besides the obvious differences in each concert hall such as acoustics and the size and shape of the stage, each backstage area offers unique challenges for our stagehands, who often work at all hours of the day and night moving large amounts of cargo in and out.  Sometimes there is not enough dressing room space for everyone to dress in relative privacy, which usually means that the men’s wardrobe trunks end up in a semi-public hallway.

Stories of unexpected things that have happened on tour could easily fill many pages — both those events I’ve witnessed myself and those incidents that are notorious and have been passed down as part of the lore of tours past.  People overindulge.  They get lost.  They get mugged.  They eat a bad oyster.  They fall off everything from stages to Segways.  They fall victim to jetlag and sleep through alarms.  A physician travels with us on all foreign tours — I have joked to him that he should keep a PEZ dispenser full of Ambien in his pocket at all times.  What passes for “coffee” around the world is a topic of constant exploration.  Navigating an endless series of delicious hotel breakfast buffets without gaining weight is offset by the fact that most hotels now have passable gyms.

As with any extended time away, people look forward to returning home as the tour nears an end.  I never forget to thank the staff members whose expertise and hard work allow our trips to be both musically and logistically successful.

Upcoming tours of the Chicago Symphony Orchestra include a sweep through California in February 2012 and a much-anticipated visit to Italy and Russia in April 2012.