In Part 1 of this blog on finding balances, we discussed the large body balances which are useful in playing the cello. As Elizabeth Morrow wrote in a 2007 article in the American String Teacher journal: “Balance is a necessary component to arriving at maximum energy efficiency with minimal effort, a sensation we interpret as relaxation”.

Next, we will explore some of the balances involved in using the bow.

I prefer to use the term “bow balance” rather than “bow hold” or “bow grip”, because “holding”or “gripping” implies using muscles. Just as we prefer to use the term “arm weight” rather than “pressure” in describing the way to produce sound, the words we use influence the way we think about what we are doing. In our “bow balance”, the thumb is perhaps the most important finger. It is the “counter-balance” to the other fingers, and without the thumb we could not hold the bow.

In playing the cello the thumbs on both hands should be bent outward (some teachers say a “bumpy thumb”), not squished in. The reason for this is that when the thumb is bent inward it is designed to grab onto something like a hammer or other tool. It maximizes the grip and enables power and strength from the arm to manipulate a tool. However in playing the cello we do not need that kind of force – in fact, we need to reduce tension and facilitate the flexibility of the thumb and fingers. When the thumb is round and bent out we can access the fine motor skills which are necessary for subtle nuances in playing. When the thumb is bent inward it is inflexible and leads to grabbing the bow, excess tension, and a lack of flexibility. 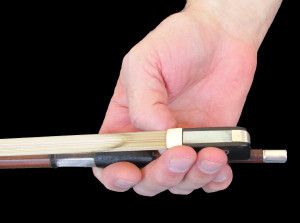 Another important type of movement is the ballistic motion. As I use the term, it refers to a movement in which a muscle fires and there is a resulting motion in the opposite direction. Christopher Berg discusses ballistic motions in his book Mastering Guitar Technique: “It is the resilience of the central nervous system and the brain that allows great virtuosos to quickly replace muscular contractions with muscular relaxations. This is the final element needed to develop correct patterns of movement. Muscles move a joint by contracting. These contractions must arise quickly, last a short time, and alternate with relaxations…” Quoting from Dr. Frank Wilson, he writes: “It is very energetic and short lasting. It launches the limb in a set direction and ceases long before the limb will have completed its course of action. Because of the similarity of this kind of move to the firing of a gun shell, it was called ‘ballistic’. ”

Using left/right contrary motion for balance also enables us to get back to the frog quickly and easily because the body is meeting the hand halfway.

Balance is also vitally important in the left hand. We balance on each finger as we play, with the minimum amount of weight needed to produce the fundamental of the pitch (I will discuss this issue in a later blog on Isometrics, Strength and Articulation).

Balance and ballistic motions are also involved in vibrato. We don’t really need to actively vibrate up and down; we can conserve energy by actively vibrating in the “up” direction, with the top of the vibrato at the desired pitch. If the arm and hand are relaxed, then the “ping” produced on the “up” motion will result in a movement in the opposite, or “down” direction. Basically, the vibrato motion employs Newton’s Third Law: every action has an equal and opposite reaction. The active motion is the “up” part of the vibrato – the reaction is passive. Since the “up” motion of the vibrato pitch is really a physical motion towards the bridge on the cello, we are using gravity as well, so we don’t have to work as hard. The “down” motion of the vibrato (which is physically moving upwards) is the reaction to this. As long as the arm, hand and fingers are relaxed the vibrato motion will bounce back without any effort, thanks to Newton’s Third Law.

As we think about these issues, we can find other situations where balance is important in string playing. For example, in finding the right balance in playing double-stops, or in finding the balance we want when playing with a pianist or chamber group. We also may be looking for some philosophical balance in our approach to playing Bach: we are somewhere on a continuum between playing in a historically accurate “performance practice” approach, versus a highly personal, romantic approach.

Now that we have discovered some of the balances in playing the cello, we should probably address issues of balances in our lives: a balance between work and play, or between “alone time” and social time, or between virtual “on-line” time and living our real lives – but I will leave that for you to figure out for yourself!

Next Monday’s Blog will begin a two-part series on open-string warm up exercises.