In Stretches – Part One last week,   I discussed some large body warm-ups and stretches. Here are some more warm-up exercises specifically for the wrist and fingers.

First, here is the international greeting for Cellists: 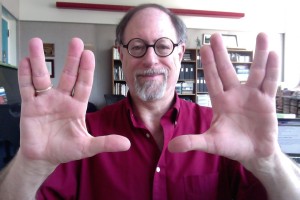 Some people know this as the Kohens’ priestly blessing. Others may recognize it as Mr. Spock’s Vulcan salutation, or as Mork and Mindy’s parody of the Star Trek gesture. But as cellists, we know that we need to separate the second and third fingers to improve intonation. If we don’t address that issue then our second finger will gravitate sharp and our third finger will gravitate flat. Since the second and third fingers share a tendon (they start out with their own tendons which then join up together) we need to be aware of the need to exercise those two fingers for coordination and intonation.

Perhaps the most un-natural physical requirement in playing the cello is the Extension. This separation between the first and second fingers gives many people difficulty until they learn how to do it properly. I will discuss some exercises for Extensions in a later blog – but in any case, doing some finger stretches is very useful in warming up every day.

I have rather webbed-fingers. When I was a student in Freiburg I was very frustrated with the inflexibility of my hands, and the difficulty I had in separating the fingers adequately. To deal with this problem I used to walk around town with a cork  (from a wine bottle the night before??)  between my fingers, just to help train the fingers to separate. 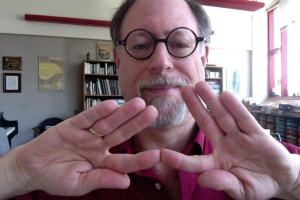 Here are some other finger and wrist exercises that I find useful – I rotate around these exercises doing different ones on different days:

There are lots of other finger stretches that one can do to increase flexibility, including folding, bending and tapping the fingers, and even using the Chinese medicine balls which make a pleasant sound when you roll them in your hand. You can make up your own, or find various tutorials on the web. Here are a few that I find interesting:

In next week’s blog we will take a look at the importance of balance, and look at some exercises for using balance to make playing the cello easier.