In the first part of this series on thumb position (Blog #19), we discussed the basic techniques for understanding the geography of the upper registers of the cello. There are three concepts for knowing the “latitude and longitude” in this part of the instrument:

1. Using nodes and other fixed points for reference

a) understanding and using intervals

b) the “Configuration of the Hand” across string

3. Using the basic thumb position, as described above, and organizing  the finger spacing with tetrachords

2b. Configuration of the Hand

Knowing the intervals and distances on one string is vital in understanding the geography of the upper part of the cello. But one still needs to know how notes relate across the strings. For this it is important to understand the intervals that are created when you play two notes on two neighboring strings. I address this with a system that I call the “Configuration of the Hand”, in which we explore all the combinations of the fingers across two strings. 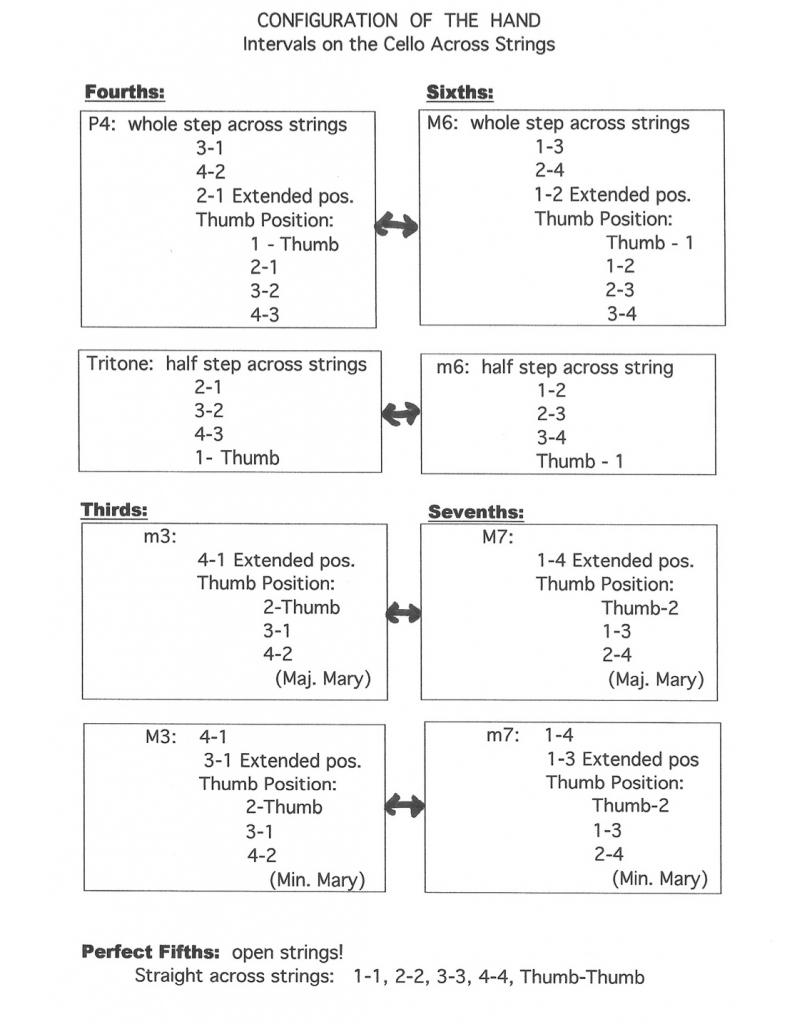 As discussed previously, it is important that the basic thumb position is stable and consistent. In other words:

The next important step in creating a usable thumb position is figuring out the spacing between the other fingers within the octave (or P4) frame. Since we can play four notes with the four fingers in thumb position (using thumb, 1,2,3) it is useful to identify the various possibilities as tetrachords (four note groupings), giving them names. The most common tetrachords are:

Notice the relationship of the first three to the Marys that were discussed in an earlier Blog (#17) – the intervals from the bottom up are the same. All of them are named after the scales that they initiate. The Harmonic Minor Tetrachord is used in minor scales, with an Augmented Second between the 2nd and 3rd fingers:

We also have Tetrachords in which the interval between the thumb and the 3rdfinger is bigger or smaller than our standard octave or P4. For example the Chromatic Tetrachord, the Lydian Tetrachord (named after scales that begin this way). The Gypsy Tetrachord, and two others are used less often in western music, but they do occur and it is useful to practice them.

I find it helpful to do a variety of different scales in thumb position, recognizing that scales are made up of two tetrachords. In the following chart I present some of the many possibilities of scale systems using thumb position tetrachords. The first three are symmetrical scales, with the same tetrachord on both strings. The others use a variety of combinations of tetrachords. They should be practiced in all keys going up the cello. The ( w ) or (h) in the middle column indicates the interval (whole step or half step) between the third finger and the thumb as we cross strings. In the Locrian, Whole Tone and Octotonic scales the thumb has to move back a half-step during the string crossing. In the Octotonic scale we need to use the 4th finger as well. 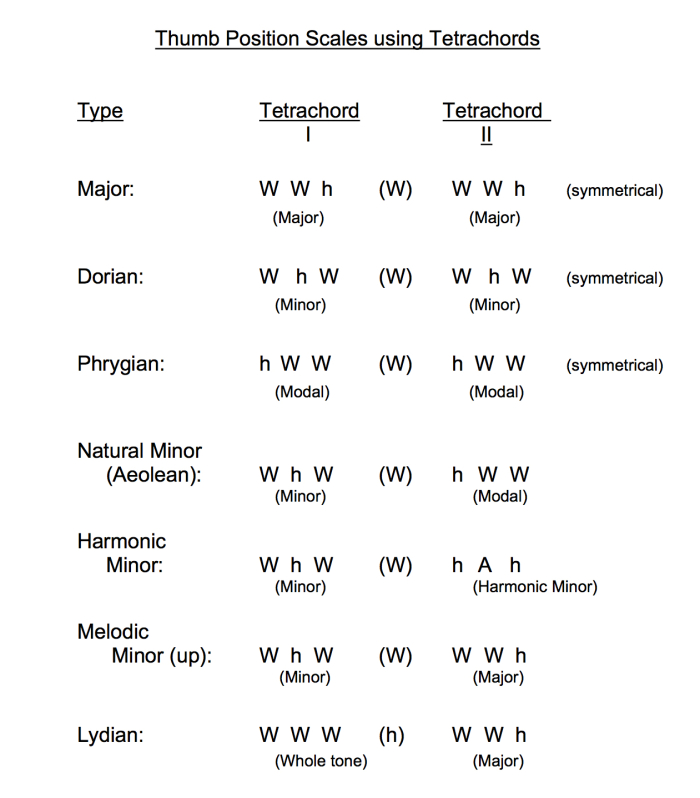 In the second half of this passage the thumb works like a percussive finger, lifting each time it moves back. More about this in the next blog (#21) with exercises by Alexanian for the moveable thumb.