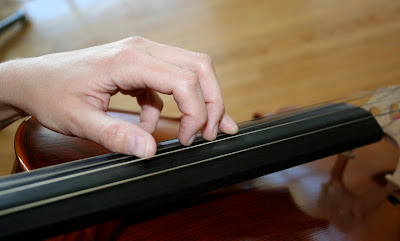 When students come to study cello with me in college they often arrive with problems in their fundamental technique which must be addressed: issues with collapsing fingers, bow angle, underlying tension, weak sound, etc. Most of these basic problems can be dealt with fairly quickly once the student becomes aware of the issues and knows how to fix them. However the bad habits that seem to be the most intractable are problems regarding the curvature of the thumb. In pedagogy classes and in talking with teachers I always emphasize that young cellists should be taught to train their thumbs correctly in order to help avoid excess tension and to allow maximum flexibility. Teachers need to be vigilant about this in the early stages of a cellist’s development in order to prevent future problems, including tendonitis. The incorrect usage of the thumb is one of the most difficult problems to correct later in a cellist’s development. It is crucial that students learn it properly from the beginning, and that teachers monitor it constantly throughout the student’s career.

In playing the cello the thumbs on both hands should be bent outward (some teachers say a “bumpy thumb”), not squished in. 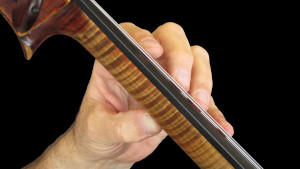 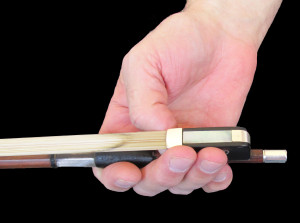 The reason for this is that when the thumb is bent inward it is designed to grab onto something like a hammer or other tool. It maximizes the grip and enables power and strength from the arm to manipulate a tool. However in playing the cello we do not need that kind of force – in fact, we need to reduce tension to facilitate the flexibility of the thumb and fingers.

It turns out that the thumb has more nerve connections to the brain than any other part of the body – except the tongue. I think that this is interesting in that what separates Man from other animals is that humans have the ability to speak (tongue) and the ability to use tools (thumb). So, evolutionarily the prehensile, opposable thumb was intended to be used for holding things and using tools, while at the same time it can be amazingly sensitive and dexterous.

The thumb should be across/behind the second finger on both hands in playing the cello. Although some cellists advocate the thumb connecting with the middle (3rd) finger on the bow, I think it is preferable to use bilateral symmetry, with the same thumb-2nd finger relationship in both hands, so that one side of the body is similar to the other side. It is especially important for the left hand thumb to be under the second finger in extensions. One of the major problems with young cellists is that they don’t release the thumb before making forward extensions, so the hand position becomes distorted, tension is increased, and intonation suffers.

Although it is sometimes difficult for students to train the thumb into the optimal configuration, it is important for teachers to help them get this right. That means being vigilant, determined and also thinking creatively about how to build good habits.

The left hand thumb needs to be well organized in the neck positions before a young cellist starts playing in “thumb position”, where the thumb is used as a finger up on the fingerboard. In “thumb position” the structure of the left thumb is opposite from what was previously described. In “thumb position” the joints are reversed: the distal phalange (the part with the nail) should be bent inward and the joint at the base of the thumb should poke out. I call this the “inny” and the “outy”. In establishing the basic “thumb position” (creating an octave between the thumb and third fingers across the strings, or a Perfect Fourth on the same string), the knuckles should not be squashed down, and there should be a C-shape between the thumb and the first finger as you look down the fingerboard. 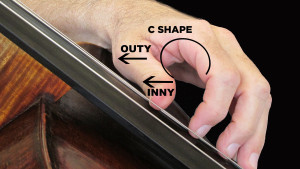 Using the thumb with this configuration adds strength and stability to thumb position, and prevents the thumb from wobbling when moving up and down the fingerboard. To help strengthen the thumb you can use isometric exercises, as described in an earlier blog.

There is some disagreement among professional cellists whether the thumb should be on one string or two strings in thumb position, but I recommend first creating a stable thumb across two strings in the octave position for young cellists, and then later using it on just one string in order to reduce tension in passages where the second string is not being used. However, most pieces which require “thumb position” employ octaves and double-stops. In those situations it is best to have the thumb across both strings.

In next week’s blog, I will discuss a way of thinking about geography in the upper registers of the cello. We will also look at tetrachords and the configuration of the hand.