In today’s blog I will discuss two related left-hand issues: finger strength and articulation, and offer some isometric exercises to strengthen the fingers.

So, actual muscle strength is probably less important in cello playing than flexibility, release of tension, and gentle power.  In Western culture one of the symbols of strength is a powerful tree, such as an oak tree or a chestnut tree. For example, in Longfellow’s poem The Village Blacksmith:

“Under a spreading chestnut tree, the village smithy stands; The smith, a mighty man is he, with large and sinewy hands. And the muscles of his brawny arm…”

However in some Asian countries strength is symbolized by a willow tree, which flows with the wind. In a storm, it is more likely for the powerful oak tree to fall than the flexible willow tree.

Some people think that they are double jointed and use that as an excuse for not having round fingers. In my experience over the last 45 years of teaching, there are very few people who are actually double jointed. In most cases the tiny muscles of the fingers have just not been sufficiently strengthened to prevent the fingers from collapsing. However this can be addressed very easily through isometric exercises.

Casals was known for using a “percussive” left hand, which helps to insure that every note speaks, and that every note is articulated clearly and cleanly. Ivan Galamian discusses this issue in his book Principles of Violin Playing and Teaching:

“In instrumental music, the relationship of the percussive elements to those of the purely singing sound is analogous to that of the consonants and vowels in speech and song…The consonants (the percussive or accentuated elements) provide the articulation which can be produced by either the left or right hand…With the left hand, the consonant can be produced by energetic and fast dropping of the fingers for ascending passages. The counter-part, in descending passages, is a sidewise lifting of the fingers that produces almost a slight pizzicato effect”. (Galamian p. 10)

It is better to think in terms of finger weight (or arm weight), rather than finger “pressure.” Pressure implies muscles and tension—much like a “pressure cooker.” Weight implies relaxation and gravity.

It is really important to relax the finger once it hits the string, and not to give in to the temptation to squeeze the string down. When I first started to teach I had a very talented 12-year old girl, who played about as fast as anybody could possibly play. I couldn’t understand how she could play so fast. But then I realized that she never pushed the string down at all—in fact she played completely on the side of the string. She didn’t have a big sound at all, and what she had to figure out was how to play “forte” in her right hand but continue to play “piano with her left hand.

There are essentially four kinds of finger weights for playing: “Setting Strength”–when you articulate and the finger first comes down onto the string there is a moderate amount of weight, as a result of the speed of the finger coming down on the string.

Here are several warm-up exercises for articulation. I think it is really helpful to practice these on the arm as well as on the cello, as we discussed in the Blog #9 on miming. For all of these exercises it is important to keep in mind the principles mentioned above. 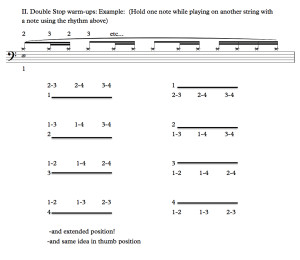 Here is a great series of exercises for finger articulation by Radu Aldulescu. The notated example is with the fingers 1,2,3,4. Below that is a chart with all the combinations of the fingers : 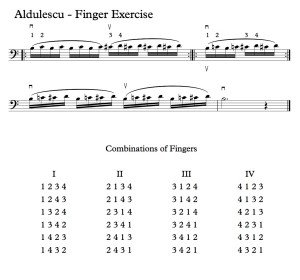 Here are a few examples, including a double-stop version of the exercise, holding one finger on another string.

All these exercises are good preparation for trill exercises. According to Galamian:

“The principle that fingers should not be lifted high and should not strike hard is particularly true in its application to trills… Over-development of strength in the fingers is especially detrimental in executing the trill.” (Galamian, p. 30)

The Cossman Exercises are classics for working on articulation, clarity and intonation. Most people know the first Cossman exercise. Here are also some variations on that exercise, and also the second Cossman articulation exercise: 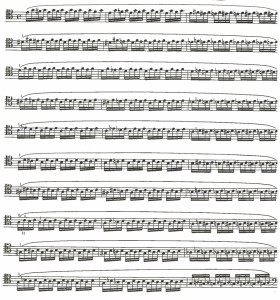 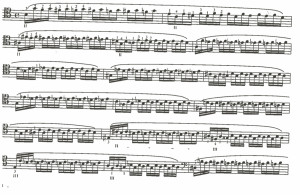 The Cossman exercises test our strength, relaxation, and endurance; if we have difficulty getting through these exercises on all the strings and then back up we need to examine whether we are pressing/squeezing with the fingers. For endurance it is best to add a few measures each day—always being mindful that there should be no pain in playing. We also articulate with the bow—by “kissing” the hairs with the stick, much as we did in the “Getting Into the String” Exercise (see blog on Open Strings).