Teaching at Cello: An American Experience — by Mark Summer

Teaching at Cello: An American Experience — by Mark Summer

As a founding member of the Turtle Island Quartet, I am grateful to Paul Katz for asking me to contribute to CelloBello. As a conservatory-trained, improvising cellist, I hope I can bring a unique perspective to this forum with thoughts on performing, teaching, and traveling with my cello.

This past summer I enjoyed five days of intensely rewarding teaching and performing at the summer music program, Cello: An American Experience. The program attracted 18 young cellists from around the country, and is held at St. Olaf College in Northfield, Minnesota, 44 miles south of Minneapolis. 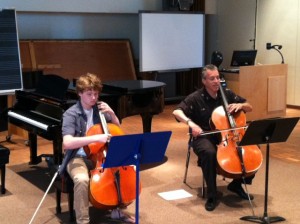 My introduction to Cello: An American Experience began with a Facebook message sent to me from the director, and my old colleague, Anna Clift. Anna and I had last seen each other in the summer of 1976 at Congress of Strings, held at the University of Washington in Seattle. It was a training program for high school string players from all over the U.S., established in 1958, and paid for by the American Federation of Musicians union locals throughout the country.

In 2011, Anna Clift, now a freelance cellist and cello teacher, started Cello: An American Experience, and asked several alumnae from both the Congress of Strings I had attended. Joshua Koestenbaum, Bruce Uchimura, and Laura Sewell joined her. When she messaged me, she let me know that her intention was to have a mini-reunion of those halcyon days of the summer of ’76. Not that I needed that inducement, but it was a very enjoyable part of the five days I was at St. Olaf’s. 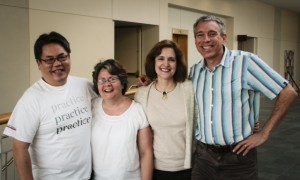 I had been looking forward to this program all summer, practicing nearly every day for my “recital,” and working very hard on Giovanni Sollima’s vibrant tour de force, Violoncelles, Vibrez! for two cello soloists and string orchestra. This is a wonderful piece that I urge all cellists to familiarize themselves with. Written in 1993, it has a vibrancy and beauty that is inspirational. When I discovered that there was a version of this piece for eight celli, I asked Anna if it would be possible to perform the piece at her camp. She was enthusiastic, and scheduled the necessary rehearsals, which not only included teachers Bruce Uchimura, Laura Sewell, and herself, but also three gifted participants of the program, Caitlin Schmidt, Phuc Phan Do, and Andrew Shiau. It gave me a chance to reconnect with Joshua Koestenbaum, associate principal cellist of the St. Paul Chamber Orchestra for the past 28 years, who made up our eighth cellist. The Sollima veers between aggressive, forcefully driving passages that interlock in maddeningly complicated ways, and the canonic sections that contain some of the most sublime music I’ve ever played. This was the very first time I’d heard the piece live, and the sound of eight celli was a powerful and uplifting experience. 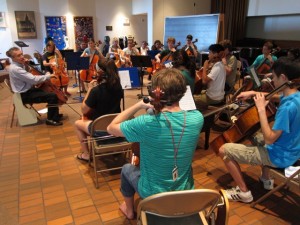 Mark Summer teaches a class on improvisation at Cello: An American Experience at St. Olaf College in Minnesota

My first full day at the program included a three-hour master class. I’ve taught a few master classes before, but they always involved working with a chamber music ensemble, not cellists playing classical repertoire. I had some trepidation about doing this class. You could say that when I think of my classical background, and the intensity of my feelings surrounding my student days, sometimes it feels like I’m still suffering from posttraumatic stress disorder.  However, this master class was far from stressful, and consequently, a very enjoyable experience. It didn’t hurt that the first piece I coached was a performance of my arrangement of the old English carol, “Lo, How A Rose E’er Blooming”. I did this arrangement years ago, and have been performing it at Turtle Island Quartet’s “Solstice Celebration” concerts each December. It was beautifully played by Caitlin Schmidt, and her performance helped me ease into the master class. I also coached a preternaturally talented young man, Oliver Chiu on Dvorak’s Silent Woods, a piece for cello and orchestra that I had heard for the first the night before on YouTube.

I also gave six students private lessons, coaching everything from the Lalo Cello Concerto to working on my signature solo piece, Julie-O. Without exception, I found these young cellists to be extremely proficient technically, and charming and inquisitive personally. Working with the students filled me with hope for the future of both classical music and the arts in general. These were bright young people, extremely excited to be playing the cello at this level. Many of them were hungry for the extended rhythmic techniques I was offering. In fact after the improvisation workshop I taught a couple of days after I arrived, I was asked by the students to arrange a “jam session.” I decided to make it another class on improvisation, and was glad I went in that direction, as all 18 students showed up for some more work on soloing over a couple of popular jazz standards. The first, Sonnymoon For Two, by Sonny Stitt, was simple to learn by ear, which is really the preferred way to learn jazz tunes. Soon, all of us were playing the piece, a 12 bar blues, with enthusiasm. After getting everyone to solo over a C blues scale, we transitioned to “So What”, a seminal model tune by Miles Davis which gives the bass, or in this case, the cello the melody, played in pizzicato. As I played the piano accompaniment with the distinct sounding fourth voicings as originally played by jazz piano legend Bill Evans, all 18 cellists improvised over the form with great success. The smiles and enthusiasm were especially gratifying to me.

My recital the night before was more rewarding that I could have expected. In addition to performing most of my solo pieces, including Julie-O, and Kalimba, which I recorded on the Grammy®-nominated album with Paquito D’Rivera, The Jazz Chamber Trio. I also performed several jazz standards, as well as playing the first cello solo part in Giovanni Sollima’s Violoncelles, Vibrez! Performing this piece was a dream of mine ever since I heard it, and the 8 celli made a glorious sound. I took this opportunity to also perform “More Human” by Swedish pianist Lars Jansson, accompanied by staff pianist John Jensen. In an impromptu arrangement, I ended up playing most of the first melody solo, having John join in near the end of the “head.”

Finally, I took what I considered a terrific risk and played three pop tunes, two by Paul Simon, and one by the Beatles, singing while I played my cello. I had decided to do it for the kids, to show them some more possibilities, and to prove to myself that I could do it. I never had as much fun performing as I did that night, to that audience, mostly made up of fellow professional cellists and cello students. When I was finished, and made my way backstage, the students made a gauntlet for me to walk through; this was a complete surprise to me. It was a wonderful finish to my experience teaching and performing for Cello: An American Experience, a teaching and performing experience I will remember for the rest of my life.

I can be reached by e-mail at mark@turtleislandquartet.com.

About the Author: Mark Summer

Widely regarded as one of the outstanding cellists of our time, Mark Summer is known worldwide for his phenomenal percussion and pizzicato techniques combined with bowed jazz and fiddle phrasing.  Mark is a co-founder of the two-time Grammy®-winning Turtle Island Quartet, and was the quartet’s cellist for 30 years. He is a graduate of the Cleveland Institute of Music where he was a student of former principal cellist of the Cleveland Orchestra, Stephen Geber. In 2008, he was awarded a Distinguished Alumnae award from CIM. Mark was a tenured member of the Winnipeg Symphony from 1981–1984, before leaving the orchestra to perform in several Canadian contemporary and Baroque ensembles, as well as his own group, The West-End String Band. Asked to perform at the Winnipeg Folk Festival in 1985, the group went on to record Mark’s original music for CBC Radio. In the fall of 1985, Mark visited the Bay Area where he was invite by David Balakrishnan to help form Turtle Island Quartet.

Mark continued to touch base with his classical roots, performing with the Chamber Symphony of San Francisco, the Oakland Symphony, Oakland Ballet, and the contemporary music ensemble, Earplay. Over 30 years since embarking on an improvisational musical odyssey, Mark has continued to develop a unique and multi-timbered style, which incorporates virtuoso jazz soloing, distinctive bass lines and extensive percussive techniques adapted from the guitar, bass and drums.

He has been the subject of feature articles in Strings and Bass Player magazines, and has published several pieces for solo cello; his best known and beloved “Julie-O,” has been performed by cellists all over the world, and was featured on two episodes of NBC‘s “Parenthood.” In addition to composing and his past performances with Turtle Island Quartet, Mark currently performs in a trio with jazz vocalist Tierney Sutton, a seven-time Grammy®-nominated singer. Mark also performed in a trio with clarinet virtuoso Paquito D’Rivera of which their recording, The Jazz Chamber Trio, was nominated for a Grammy® in 2005, and includes Marks piece “Kalimba” for solo cello.

Mark has recorded on numerous motion picture soundtracks and performed and/or appeared on albums with Linda Ronstadt, Toni Childs, guitarist Jeff Tamelier of Tower of Power, singer-songwriter Debbie Friedman, saxophonist Kirk Whalum, and guitarist Will Ackerman.  In 2011, he made his American debut as an orchestral soloist, premiering David Balakrishan’s cello concerto “Force of Nature,” written especially for Mark. In 2013 he had his European solo premier, performing the concerto with both the Neuss Chamber Orchestra and the Georgian Chamber Orchestra Ingolstadt. For the last several years, he has taught and performed recitals at Cello: An American Experience, a program for young cellists.