Curtis on Tour is Stalled by Airline Refusal To Take Cello

Curtis on Tour is Stalled by Airline Refusal To Take Cello

Students from the Curtis Institute were boarding a plane at Philadelphia this weekend at the start of a tour of Spain when a Lufthansa official refused to take a cello on board.

The cellist, Zach, had to take another plane – American Airlines, no problem with cello – but he could only get a flight to London and spent many hours trying to connect up with the others in Valencia.

The first Curtis on Tour performance is May 18 in Alicante.

Curtis have confirmed that ‘there were indeed difficulties with a cello’ and are looking into the incident.

Lufthansa have offered no excuses, yet. 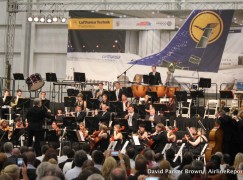 Apparently, at Philadelphia airport, Lufthansa staff gave a variety of reasons why the cello ticket could not be issued to the group. First that a boarding pass could not be printed in their system, then that the ticket was not paid for.

Despite a confirmation from Curtis’s travel agent that the ticket was paid for and a ticket number, Lufthansa was unable to resolve the problem within 2 hours, and the flight departed without the cello or cellist on board. The flight was booked through a an experienced classical-music travel agent who has booked many cello tickets down the years. She has never seen anything like this before.