Memories of Bernie: Music and Food — by Laurence Lesser

Memories of Bernie: Music and Food — by Laurence Lesser

The first time I met Bernard Greenhouse was after a performance the Beaux Arts Trio gave of the Beethoven Triple Concerto with the Baltimore Symphony. I was teaching at the time at Peabody (1970-74). My wife and I were invited to join them at a restaurant after the concert and we had pleasant conversation. But what I remember most was the effortlessly beautiful opening of the concerto’s slow movement. It had such grace I have never forgotten.

Even before then, when I was studying with and then assisting Piatigorsky at USC, I remember a conversation at my teacher’s home when he was holding the LP of the Beaux Art’s recording of the Dvořák f minor Trio. Heifetz and he had just released their performance with Leonard Pennario of the same piece. Piatigorsky said, “They play it so beautifully, who would ever want to listen to ours?”

We really didn’t become friends until after I had become NEC’s President in 1983. NEC had started a very special competition with support from the Piatigorsky Fund to identify a young artist who not only played well as a soloist, but also as a chamber musician and could teach. From the beginning my colleagues on the jury were Bernie and his great friend Raya Garbousova. Each of three seasons every other year we came together four different times to listen to one of the candidates—and there was always plenty of opportunity for good talk and good food! 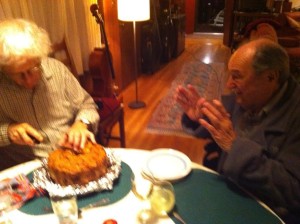 “…and make it a really big piece!”

Bernie came to NEC to teach for several years and that even more cemented our friendship. During that time and even more after that was over, I would visit him at his home in Wellfleet. He would reminisce about Casals and Feuermann, two great artists who had greatly influence him.

First came Feuermann. In the late 1930’s, when Feuermann was living in New Rochelle, Bernie was doing well professionally as principal cellist of the CBS Orchestra. But, he told me, he was fascinated by Feuermann’s astonishing control of the cello and he sought him out for lessons. He told me two anecdotes about that relationship:

With his earnings from the orchestra, Bernie had just bought a very fine automobile and he drove it to Feuermann’s house. The latter loved cars and even before the lesson could begin, Feuermann insisted on taking it out for a spin. Feuermann also was known as a tough teacher. Bernie said he was observing a lesson and after the student played a difficult passage not very well, Feuermann said, “Maybe if you practice it for a couple of years you might learn it—no, I think you’ll never get it.” Who might the student have been?

With Casals, it was quite different. Casals had gone into exile from Spain because Francisco Franco had become its dictator. Casals was living in Prades, France, a small town just north of the Pyrenees. Bernie was in Paris and determined to find his idol. He had very little money, but somehow when they met he and Casals worked out the finances.
At his first lesson, Casals complimented Bernie but said he had only one kind of sound and that they needed to work on his vibrato. Casals told him before the next lesson to learn the slow movement of the Bach D Major Gamba Sonata. The instruction was, first, to play it for Casals with NO vibrato. Then he should use vibrato but would have to justify what kind on every note. Bernie said the week leading up to that lesson was one of the most stressful of his life.

Aside from all the “cello talk” the other great bond we had was cooking. Bernie loved steak and he loved seafood. Wellfleet was perfect for the latter—he got to know all the fisherman there and always kept a whole drawer full of fresh oysters and clams in his refrigerator. He was a wonderful cook—I still remember his finesse in cutting up an onion so it didn’t fall apart until the last slice. We were both interested in baking bread and he gave me a sourdough starter he had gotten from when he and his Bach Aria Group had been in San Francisco. Soprano Eileen Farrell and he had been invited to dinner at the home of some “old-timers.” Table talk turned to bread and the result of that was he went home with a batch of starter that, it was claimed, went back to the Gold Rush days. I still have a portion of that in my refrigerator. But the other thing was that once I brought him an apple cake I had made that he loved. For the rest of his life, it was unthinkable for me to arrive for a visit without bringing one fresh out of the oven. He would divide it up into portions to freeze and he hoped that would tide him over until my next visit.

By the way, we all have heard of “Johnny Appleseed”—I’d like to be known as “Larry Apple Cake” and so here is my recipe for you to use and share broadly:

Sift together and set aside.

Mix loosely together and set aside.

Combine oil/margarine in a mixer with the sugar. Add eggs one at a time. Add vanilla extract. Mix in dry ingredients, a bit at a time. Combine this with fruit and turn into a well oiled and floured 9″ tube pan. Bake in a 350° oven for 1 hour 15 minutes. Cool in pan. This cake will keep for about one week.

But at the center of it all was music. Bernie had strong musical values—a love of expressive playing, an admiration for technical command, a deep belief in the way Casals played and a pride of possession of his beautiful Strad. Once, when I played a recital in Wellfleet, he lavishly admired my 1622 Amati with its beautiful sound and deep resonance. I said I would trade it to him in exchange for his Strad. He didn’t bite… 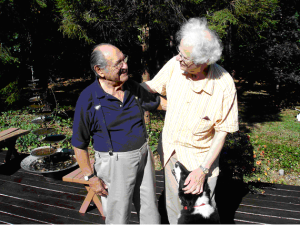 About the Author: Laurence Lesser

A native of Los Angeles, LAURENCE LESSER was a top prizewinner in the 1966 Tchaikovsky Competition in Moscow and a participant in the historic Heifetz-Piatigorsky concerts and recordings.  Mr. Lesser has appeared as a soloist with the Boston Symphony Orchestra, the London Philharmonic, the Los Angeles Philharmonic, the New Japan Philharmonic, the Tokyo Philharmonic and other major orchestras.  His New York debut recital in 1969 was greeted as “triumphant” and “magical.”  His Tchaikovsky Rococo Variations in Hamburg, Die Welt stated, “could not have been more thoroughly realized than is this staggering performance.”

As a chamber musician he has participated at the Casals, Marlboro, Spoleto, Ravinia, Music@Menlo and Santa Fe festivals.  He has also been a member of juries for numerous international competitions, including chairing the Tchaikovsky Competition in Moscow in 1994.

A 1961 graduate of Harvard College, where he studied mathematics, LESSER went to Köln, Germany the following year to work with Gaspar Cassadó. Just before, he played at the Zermatt master classes for Pablo Casals, who declared, “Thank God who has given you such a great talent!”  He won first prize at the Cassadó Competition in Siena, Italy in 1962. When he returned to Los Angeles, he studied with Gregor Piatigorsky and soon became his teaching assistant and regular faculty member at the University of Southern California.

During the remainder of the 60’s he was a frequent contributor to the artistic life of Los Angeles.  Notably, his 1965 performance of the Schoenberg Cello Concerto to inaugurate the Bing Auditorium at the Los Angeles County Museum of Art was its first hearing with orchestra after Emanuel Feuermann introduced the work in the late 1930’s.  He recorded it the following year for Columbia Masterworks.  He left Los Angeles in 1970 to become Professor of Cello at Baltimore’s Peabody Institute.

LESSER was invited in 1974 by Gunther Schuller, the then President of New England Conservatory, to head NEC’s cello department.  In 1983 he was named the school’s President, a position from which he retired in 1996 to return to performing and teaching.  A high point of his tenure as President was the complete restoration of the 1000-seat Jordan Hall, one of the world’s greatest acoustical spaces.

Teaching has always been an important part of LESSER’s artistic activity.  His former students, numbering in the hundreds, are soloists, orchestra section leaders and members, chamber musicians and teachers, active throughout the USA and in many other countries around the world.

LESSER’s previous recordings include the complete Beethoven with pianist HaeSun Paik on Bridge Records.  Other labels include RCA, Columbia, Melodiya and CRI.