On How to Play the Baroque Cello: the Baroque Bow, or What Your Ear Imagines Your Bow Should Do (Part 1) — by Guy Fishman

On How to Play the Baroque Cello: the Baroque Bow, or What Your Ear Imagines Your Bow Should Do (Part 1) — by Guy Fishman

What Your Ear Imagines, Your Bow Should Do. Remember this as you read the following.

Here’s another Hallmark-worthy, embroiderable line: The Bow is the Soul of the Violin. By extension, the description applies to the cello, as well. Writer upon writer of numerous treatises from the 1540s to the 1920s describes the bow in exactly these terms. When, in 1924, Carl Flesch declared that the bow was responsible for clearly-defined intellectual tasks, while the left hand (meaning a constantly vibrating left hand) awakened the “deep feelings which subconsciously slumber in our souls,” he was performing a 180-degree turn away from over 450 years of string-playing tradition. He was describing a trend popular with himself and many others, where constant vibrato and a purely instrumental sort of “singing” was displacing what may have been a more nuanced, speech-like approach to music making, even during the most fervently “romantic” decades of the 19th century. Still, it cannot be denied that a great player, even one who “sings” and vibrates constantly, must be possessed of a great bow arm. This was as true in the seventeenth and eighteenth centuries as it is today, and it is worthwhile to explore what such great players may have encountered using the equipment they had available, generally known to us as the baroque bow. 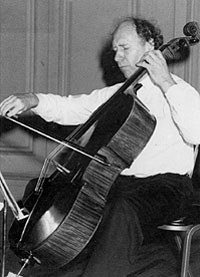 I wrote in some of my earlier posts that the experience of attempting a period cello often seems initially as one of self-denial, in the sense that one strips away many of the features found on the standard cello that were meant as improvements. These range from sonically inconsequential fittings such as fine tuners to more important tools, such as the endpin, as well as those that significantly affect the sound of the instrument, such as the modern bridge, a longer bass bar, and steel strings. The baroque bow is another tool that, prior to the early music movement’s resurgence in the 20th century, was relegated to museums. That is, if it survived, as many fine samples were simply used for firewood once the so-called transitional period (about 1760 to 1790) commenced, and certainly once Francois Tourte standardized the model we all use, which he did late in the 18th century. If you could afford a brand new bow, you cooked your dinner upon a fire fueled by a snakewood “baroque” bow.

But creativity expressed in making art should be a compounding positive enterprise, not a restrictive one. There are many good answers to asking why a player would want to turn back the clock on such wonderful accessories as the endpin and take up an archaic and potentially risky manner of playing. You can pick up a period instrument because you’re curious, or because you love the sound. You may feel closer to the composer’s intentions when using an instrument more appropriate to the time period in which the music was composed. Or maybe you determine to learn the viola da gamba, for instance, because consort music just isn’t the same when played by a modern string quartet. Whatever the reason, putting yourself in the shoes or an 18th century musician by using his or her equipment should not result in a sense of frustrating limitation. Rather, it should conjure the sense of wonder, excitement, and possibility that accompany the performances of the best practitioners in the field, and that I believe was one of the hallmarks of music-making by our forbearers.

For this reason, an embrace of what a good baroque bow does well is essential. Even more crucial, I think, is the understanding that What Your Ear Imagines, Your Bow Should Do. Let me be clear: I find that, along with gut strings, the use of a baroque bow is the most important step in achieving the sort of music-making that could be termed “historically informed,” IF that is your intention. Much like the famous Heifetz anecdote (when complimented on the glorious sound of his violin, Heifetz held the instrument to his ear and quipped, “Sound? What sound? I hear nothing”) it is simplistic to the point of satire to say that the bow, by itself, does nothing (I said it anyway). It is what you imagine it should do which guides the tool. When Anner Bylsma recorded the Bach Suites for the second time (pictured above), he did so on the magnificent Servais Stradivari, using gut strings, an endpin, and a standard bow by Peccatte. I have heard criticisms of that recording, but never that it did not sound baroque. Likewise, I have witnessed fine players performing baroque music on standard instruments, fitted with steel strings, and using baroque bows; the interpretations and concept of sound production seemed steeped in late-19th and early-20th century conventions, equipment notwithstanding. That is because What Your Ear Imagines, Your Bow Should Do.

So, what’s the point? If Bylsma can produce a “baroque” sound with a modern bow, albeit an extremely fine one, why bother using a baroque bow? Before making that recording, in 1992, Bylsma had been using a baroque bow for period performance for almost 30 years. He bought his after an initial tour along with two early music pioneers, the flutist and recorder virtuoso Frans Brüggen, and the harpsichordist Gustav Leonhardt. He describes Brüggen’s rapid runs as a “string of pearls,” and remembers the frustration of trying to create the same effect in his continuo line but feeling his modern bow was unsuitable. In other words, he felt his equipment was not particularly helpful in creating an aesthetic, one he was only beginning to explore. Having later achieved the aesthetic, he could return to the previously-inappropriate equipment and recreate it, as he did for his recording of the Bach. He imagined it, and his bow did it.

It is both in the creation and the expression of an aesthetic that the use of a baroque bow can be deemed requisite. What it can teach the player, through an understanding of some more-or-less intrinsic qualities, can widen the breadth of the player’s imagination and shape his or her aesthetic values, which can then be expressed through the very tool that helped create them. At least, that is my experience. Though I use gut strings for playing music from all periods, I purchased my baroque bow at a time before I owned a period instrument, and first got to know it on steel strings. Next week, I will write about the differences and qualities I encountered, as well as recount the opinions of several esteemed contemporary archetiers of baroque bows as to what to expect when handling a pre-Tourte bow.

About the Author: Guy Fishman

Israeli-born cellist Guy Fishman is active as a concerto soloist, recitalist, chamber musician, and orchestral player. He was recently appointed Principal Cellist of Boston’s Handel & Haydn Society, with which he made his Symphony Hall solo debut in 2005. Mr. Fishman is in demand as an early music specialist in the United States and Europe, performing in recital and with Boston Baroque, Apollo’s Fire, Emmanuel Music, the Boston Museum Trio, Arcadia Players, and El Mundo. He performs on standard cello with the Orchestra of St. Luke’s, The Mark Morris Dance Group, the Albany Symphony Orchestra, the Colorado Music Festival, and the Springfield Symphony, where he has been guest principal cellist. He has performed in recital with Dawn Upshaw, Gilbert Kalish, Eliot Fisk, Daniel Stepner, Lara St. John, Richard Egarr, and Mark Peskanov, and has toured and recorded with pop artist Natalie Merchant.

Guy Fishman has performed in chamber music recitals in Boston’s Jordan Hall and Sanders Theater, and Weill Recital Hall, Merkin Concert Hall, and BargeMusic in New York. He has appeared at the Tanglewood, Kneisel Hall, Chautauqua, Aston Magna, Connecticut Early Music, and Musicorda festivals. He was a member of the New Fromm Players at Tanglewood, principal cellist of the New York String Orchestra at Carnegie Hall, and has performed in fringe recitals at the Boston Early Music Festival. He has also appeared on NPR broadcasts. His playing has been praised as “plangent” by the Boston Globe, “electrifying” by the New York Times, and “beautiful….noble” by the Boston Herald. A critic for the Boston Musical Intelligencer, listening to Guy’s recent performance of Haydn’s C-major concerto, related that he “…heard greater depth in this work than I have in quite some time.”

Guy Fishman is also active as an educator. He holds faculty positions at Bridgewater State University, Providence College, and Bryant University (RI). He presents lectures and masterclasses throughout the country, and maintains a private studio at his home in Arlington, MA.

Mr. Fishman started playing the cello at age 12, and at 16 began his Baccalaureate studies with David Soyer at the Manhattan School of Music. He subsequently worked with Peter Wiley, Julia Lichten, and Laurence Lesser, with whom he completed Doctoral studies at the New England Conservatory of Music. In addition, Mr. Fishman is a Fulbright Fellow, and spent his fellowship year in Amsterdam studying with the famed Dutch cellist Anner Bylsma. Mr. Fishman has recorded for the Coro, Centaur, Telarc, Titanic, and Newport Classics labels. His cello was made in Rome in 1704 by David Tecchler.