In my next few blog posts I am going to take a temporary detour from our discussion regarding the K-Bow in order to talk about a new work that my quartet recently premiered in Paris at the Cité de la Musique. The piece is by Alireza Farhang, an Iranian composer currently residing in Paris. The work, entitled Tak-Sîm, was commissioned by IRCAM (the Institute for Research and Coordination in Acoustics and Music). 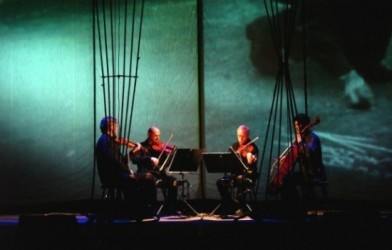 In past blogs I have spent a fair amount of time talking about the integration of technology and extended cello techniques into performance. My desire to discuss this piece comes from the fact that in my opinion this particular composition successfully integrates both concepts. In his own words, the composer’s objective was to transmit the intonation of Persian music into the instrumental parts as well as in the electronic elements. In order to do this he analyzed melodies played by a famous Iranian Setâr player, Ahmad Ebâdi, then he made a sort of harmonic structure into which the instrumental and electronic parts were both composed.

Here is a link to a video that shows much of the work that we did together in putting the piece together:

The above rehearsals were all done without the use of electronics. Although the use of technology is a large part of this type of work, I find that it is always important to have the opportunity to work with the composer in an acoustic setting in order to iron out any instrumental and ensemble issues. Without this time you run the risk of holding up future rehearsal time.

Alireza Farhang uses a petty hefty dose of electronics in this composition. In what way, do you ask? In his own words, about 90% of the work was written using the software OpenMusic. OpenMusic is an object-oriented visual programming environment based on CommonLisp/CLOS. It provides libraries and editors that make it a powerful environment for music composition. It can also be used for teaching functional and object programming. The colorful soundscape of the work is all synthesized sound that Farhang created using OMChroma, which is a library within the OpenMusic environment. Here is what they say on the OMChroma website: 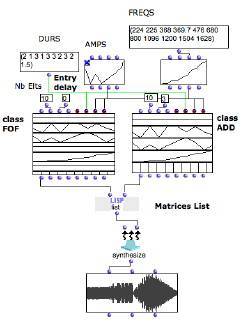 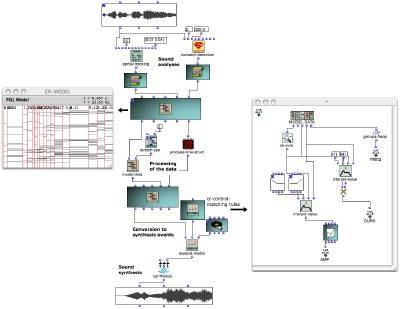 OMChroma is distributed as an external OM library by the IRCAM forum.

Using this software, there is some real time treatment of the instrumental sound. It’s sort of like sampling which is then transformed according to various parameters such as transposition or thickness of the texture. The sound designer has the possibility of working with these parameters while following along with the score.

And if things weren’t getting complex enough, we also used foot pedals in order to trigger soundscapes and to manipulate our sounds live. The sound files were triggered and controlled using the software Max/MSP. Max/MSP is a visual programming language for music and multimedia. I have performed a myriad of compositions that have used Max as it’s platform. This software is AMAZING because you can do virtually anything you want with it. The range of possibilities is absolutely astounding. That said, it is also infuriatingly squirrelly and I cannot tell you how many sound checks have come to a screeching halt because of a seemingly minute issue with the way a piece is set up within the software.

In my next blog post I will discuss some of the actual extended cello techniques that I used in performance and I will also discuss the premier itself.

About the Author: Jeffrey Zeigler

Described by the New York Times as “excellent”, and a player who performs “with unforced simplicity and beauty of tone”, Jeffrey Zeigler was the cellist of the internationally renowned Kronos Quartet for eight seasons. One of the most celebrated and influential ensembles of our time, Zeigler has performed over a thousand concerts worldwide, has premiered over 200 works and has collaborated with many of the world’s most versatile and innovative composers and performers. In the process, Zeigler has played an integral role in redrawing the boundaries of the string quartet medium.

Zeigler has been the recipient of the Avery Fischer Prize, the Polar Music Prize, the President’s Merit Award from the National Academy of Recorded Arts and the Chamber Music America Richard J. Bogomolny National Service Award among others.

The 2013/2014 Season will see the launch of a number of new projects and collaborations. Highlights include a duo with Laurie Anderson and a trio with the experimental pianist Hauschka and the Finnish rhythm master Samuli Kosminen. Both of these collaborations premier at the River to River Festival in New York City. Zeigler will also be giving the world premier of a new Cello Concerto by Canadian composer Scott Good with the Vancouver based jazz band, The Hard Rubber Orchestra. Additionally, Zeigler will be premiering a number of newly commissioned works by Kyle Bartlett, Nimrod Borenstein, Anna Clyne, Bryce Dessner (of The National), Mohammed Fairouz, Jesse Jones, Glenn Kotche (of Wilco), Richard Reed Perry (of Arcade Fire), Paola Prestini and John Zorn.

Over the course of his celebrated career, Mr. Zeigler has released over a dozen recordings for Nonesuch Records, Deutsche Grammophon and Smithsonian Folkways and has appeared with Norah Jones on her album “Not Too Late” on Blue Note Records. Zeigler can also be heard on the film soundtrack for Darren Aronofsky’s film, “The Fountain” featuring music by Clint Mansell and including performances by the Scottish band, Mogwai.

Jeffrey Zeigler holds a Bachelor of Music degree from the Eastman School of Music at the University of Rochester where he was a student of Stephen Doane, and a Master of Music degree from the Shepherd School of Music at Rice University where he served as the Teaching Assistant for Paul Katz. He then continued his studies at Indiana University under Janos Starker. Mr. Zeigler has also studied at the Britten-Pears School in Aldeburgh, England where he was a pupil of William Pleeth and Zara Nelsova. He is also the recipient of an Honorary Doctorate of Fine Arts degree from the Cornish College of the Arts.

Zeigler served as the Cellist-in-Residence at Texas Christian University and as a Visting Lecturer at Indiana University at Bloomington. Recently, Zeigler was appointed to the Cello Faculty at Mannes College The New School For Music. This season, he will also be a Distinguished Visiting Professor at the University of Oregon.