HIP, To Be Fair — by Brant Taylor

HIP, To Be Fair — by Brant Taylor

During my years in high school and college, discussions of what is now referred to as historically informed performance (HIP) could generally be summed up like this: a player belonged either to the “modern/romantic” camp or to the “authentic baroque-y” camp. Highly impressionable students forming fledgling opinions tend to view such things through an unnecessarily black-and-white lens. But something’s also changed in the larger musical community’s awareness and acceptance of what “historically informed” means. While a certain tribalism existed during the early decades of the HIP movement, today we are in a more enlightened and accepting place where, for example, wonderful and highly varied performances of Bach’s Cello Suites are noticed first for their musical merit rather than for whether the player uses gut strings or an endpin.

In teaching settings, I am sometimes asked about HIP generally and, more specifically, what it means for a performer to play Bach using a modern cello and bow. It’s a complex subject and difficult to address briefly. Multifaceted interpretive questions, and sometimes musically existential ones, immediately present themselves—questions that musicians must ponder and revisit to evolve as artists. I notice a tendency to apply HIP-style thinking mainly to music from Bach’s era, perhaps because the purity of Bach’s music brings questions of style to the forefront more than any other music we cellists play. But if we look at the larger picture, shouldn’t we want to study and perform every composer with historically informed understanding?

Learning music means spending some time down in the weeds, identifying and solving the technical challenges in a given piece. But this detailed work must be guided by our sense of a composer’s unique language and musical message. To bring real depth of expression to that message, we need some knowledge of the cultural atmosphere in which the composer lived in addition to knowledge of as much of the composer’s music as possible. The broader our base of historical understanding, including the role of music and art in the lives of people from the composer’s time, the more sophisticated and refined our musical taste becomes—and this definitely comes across when we play, in ways both obvious and subtle.

If we cultivate a good level of musical understanding—and perhaps more importantly, a sense of curiosity that keeps us wanting to know more—then ideas come to us genuinely and naturally. Steven Isserlis has noted that it’s easy to distinguish a player who is merely imitating the exterior characteristics of a musical style, like skating across the surface of it, from a player who has developed his or her voice through an inner artistic journey that, while perhaps longer, is more musically truthful. 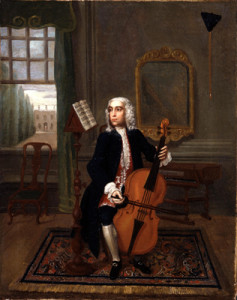 It is common knowledge that the four-string cellos of Bach’s day were set up differently than the ones most of us play today, and that the Sixth Suite and the gamba sonatas were composed for other instruments.  So then the question: when we play the gamba sonatas, do we use the cello to attempt to imitate the sound of a gamba?  No, or at least not verbatim. Instead, the cello becomes the medium of expression for that music. If the player demonstrates knowledge of and sensitivity to the time and place where the composer created, the music can carry its message just as powerfully. More obviously, does a cellist try to imitate the sound of an arpeggione when we play Schubert’s sonata for that instrument? Of course not. Using our given musical equipment primarily to try to imitate a different piece of equipment can only result in frustration. As with Bach, we want to let the beauty and eloquence of Schubert’s music speak, and bring maximum sensitivity to that composer’s unique and personal musical language.  When we play Bach, don’t we want it to sound, above all other concerns, simply like Bach? And Schubert like Schubert? And that, of course, leads us to ask how these composers are different. What makes Haydn sound like Haydn? How is a printed fortissimo in Brahms different from one in Prokofiev, or a sforzando in Beethoven different from one in Stravinsky? There is clearly no single answer, but our curiosity to experiment and attempt to make peace with these questions should produce the spirit of exploration with which we must study and eventually perform all music.

Now, to the modern cello: if we assume that the instrument most of us use to play Bach today is incapable of producing sounds that have many of the desirable qualities of instruments of the past, we are taking the easy way out, as well as doing a disservice to the expressive range of the modern cello.  The reality is more nuanced, and this is where things become really interesting for us if we choose to study music with a genuine curiosity. We have no recordings of music that Bach played or heard, but we do know what gut strings sound like: warm, complex, full of overtones. Likewise, we know how a baroque bow behaves: great clarity of articulation, beautiful tapers, more separate notes, and no deliberately bounced strokes or sostenuto in the way we are accustomed to with more modern bows. We can also realistically surmise that the sounds Bach heard, at their best, were round, open, pure, and relied less on the type of vibrato that we associate with music by Romantic and later composers.

So, can we use metal and synthetic strings and modern bows to make sounds that have these qualities, or at least honor them?  Of course we can.  Does making these sounds mean forcing the modern cello to become something it isn’t? No, not at all. The million-dollar question for each of us, then, is this: when I draw on the depth of my own musical understanding of Bach—or whoever—what sounds do I want to produce?

The fact that we have no autograph manuscript for Bach’s Cello Suites is significant, to be sure. But even if we had bowing and articulation marks directly from Bach, they are only one component of what we refer to as “style.” From Bach’s other music, we can gain meaningful insight that should directly influence our perspective on the Cello Suites. Among several other works, I recommend the French Suites to any cellist looking to refine and inspire his or her views on the Cello Suites. When we hear a great baroque cellist play, a modern cello player might be tempted to think that the period instrumentalist has exclusive knowledge, authority, or insight into music from that time—but let’s remember that we all come to Bach with our hearts and intellects first and our musical equipment second, and that the greatest artists transcend their equipment to convey the essential message of the score to the listener. A baroque cello and a modern one can both be successful at this communication, or fall flat.  Applying historical understanding to our study of music—regardless of composer, era, or equipment—can only get us closer to the truth of helping all great music to speak clearly in its own unique voice.