I often get asked about performing cycles. I am a member of a Quartet that is passionate about performing cycles of music, including the complete string quartets of Beethoven, Carter, Mendelssohn, and Shostakovich (among others). But why bother with cycles? What do they have to offer us a musicians or audience members? I like to think of it like I think of my Vikings (in case you didn’t know, I’m a huge fan). Why bother following a team game to game or season to season? Well for one, you start to learn the language of the game. Not just the game of football itself, but how that TEAM plays the game. The aggressive way they run plays or their team personality, what feeling they leave with you at the end of the season, and what exactly keeps you coming back for more. Perhaps it’s not so different for composers to write cycles. After all, as we become immersed in the language of one composer over a period of time we not only see musical, emotional and stylistic development but true connection throughout a cycle. From the audience’s perspective, cycles are like attending the main events; and they are sharing in the experience. Listening to a complete cycle of works gives the listener a better understanding of the music and also insight into the composer himself. We could be fair weather fans who just catch the big games or pull out the “most popular” quartets and perform them time and time again but in doing so we miss the sense of context. We all aim to connect with our music emotionally, and physically. In cycles, both performer and audience are taken on a journey in which history, style and personality are woven into a narrative that speaks to them in unique and deeply personal ways. 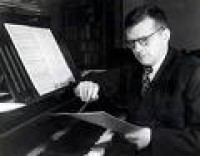 With the works of so many fantastic composers who have written extensive literature for string quartets, why Shostakovich? Something about the quartets of Dimitri Shostakovich, written over a span of 36 years from 1938-1974, are especially intriguing. Perhaps it’s the fact that they are under-played. Except for a few of the Quartets ( Nos. 3, 7, and 8 ) most of these intricate and powerful pieces are not often performed. Each of the fifteen quartets has a distinct character or personality and Shostakovich’s range and depth of emotion is vast. To put his writing in historical context, Shostakovich had been publically condemned by the Soviet government, black-listed and out of favor after his opera “Lady MacBeth” was publically denounced. Chamber music was not overly popular at the time, and artists had strict guidelines and restrictions placed on them. But regardless of what may have been happening around him, the first of his quartets opens to a strong cycle of expertly written music, chalked full of raw human emotion: grief, humor, joy, and anger, portrayed in many different ways. When I was a kid, I remember someone telling me once that all of Shostakovich’s music sounded the same. That idea stuck with me for a long time. But then as I immersed myself in his work, something changed. Our first concert of Shostakovich we performed the first three quartets. This concert so clearly demonstrated that each work holds unique and individual qualities.

Or perhaps it’s the way he used his music, making a strong connection to the historical and political events throughout his life. As the quartets develop, political statements are slowly unveiled. He was once again publically condemned in 1948 and his fourth and fifth quartets were considered “bottom drawer,” not performed until after Stalin’s death. His eighth quartet is said to be autobiographical, written in 1960 after he joined the communist party. And quartets eleven through fourteen are each dedicated to one of the members of the original Beethoven quartet. Or perhaps it’s the deeply intimate personal expression that can be heard and felt in his writing. In his final quartet (No. 15) the emphasis is unmistakably on death. Considered his most personal work and partially written in a hospital room, Shostakovich organically recapitulates themes from many of the earlier quartets. Performing the fifteenth quartet alone feels very different that the experience of playing it at the end of a cycle. For me, the deeply intimate and personal nature of these quartets makes them not only attractive, but a challenge. There’s not a weak link in the well-crafted music and to this day, I am amazed that each performer and listener walks away with a different part of the music having affected them most.

The following is from a recent symposium on the quartets of Dimitri Shostakovich, with some insight and musical clips:

As a cellist, I find that performing cycles, in particular the quartets of Shostakovich to be a particularly invigorating challenge. In the musical landscape, there is a definite role for the cello and often extended solos are given to feature the instrument. Laden with technical difficulties and often placed in a high and sometimes under-utilized register of the instrument, these quartets give the cellist a chance to truly shine. This is of course not without its challenges. With extended passages spent in the upper stratospheres of the instrument it calls for technical attention. These technical demands are great and there is a lyrical, soloistic quality called for that is not often found in string quartet literature. Perhaps my favorite moments in the quartets are in the eighth when the cello quotes an aria from Shostakovich’s opera, “Lady MacBeth,” and the high, pleading register of the passage calls for an extremely intimate and operatic use of the instrument. Quartet No. 14 is dedicated to the cellist of the Beethoven quartet, and makes a point to capture his vibrant personality and character through the instrument. The cello plays a leading role in this quartet, which can feel at times concerto-like, and is featured throughout. There truly is never a dull moment.

The truth is, I’m not a fair weather fan, in football or in music. I think if you do something, you have to do it all the way. So maybe my football team didn’t make it to the playoffs. But if you ask me, Shostakovich took us all the way to the Final Four this year.

About the Author: Brandon Vamos

Brandon Vamos has performed solo and chamber music recitals both in the U.S and abroad to critical acclaim. Called a “first rate cellist” by the Chicago Reader and praised for his “gutsy bravura” by the Chicago Tribune, Mr. Vamos has appeared as soloist with several orchestras worldwide including performances with the Taipei City Symphony, the Suwon Symphony in Seoul, the Samara Symphony in Russia, and the New Philharmonia Orchestra and the Elgin Symphony Orchestra in Chicago. Mr. Vamos has collaborated with many distinguished artists including Paul Katz, Michael Tree, Yo-Yo Ma, Menachem Pressler, and the Emerson Quartet and has recorded for Cedille, Naxos, and Cacophony Records. Awarded a Performer’s Certificate at the Eastman School of Music where he earned a Bachelor of Music Degree as a student of Paul Katz, Mr. Vamos has also studied with distinguished artists such as Tanya Carey in Macomb, Illinois, and Aldo Parisot at Yale University, where he earned a Master of Music Degree. He has previously served as a faculty member at Northwestern University and currently is Assistant Professor of Cello at the University of Illinois at Urbana-Champaign and Guest Lecturer at the University of Chicago and Boston’s Longy School of Music.

The Pacifica Quartet has achieved international stature as one of the finest chamber ensembles performing today. Recent career honors include appointment as quartet-in-residence at New York’s Metropolitan Museum of Art, the position held for 43 years by the Guarneri String Quartet. In 2009 the Pacifica was named Ensemble of the Year by Musical America and received the 2009 Grammy Award for Best Chamber Music Performance. Other awards include the Naumburg Chamber Music Award, Chamber Music America’s Cleveland Quartet Award and appointment to The Chamber Music Society of Lincoln Center’s program for gifted young musicians. In 2006 the Pacifica was awarded a prestigious Avery Fisher Career Grant, becoming only the second chamber music ensemble to be so honored in the Grant’s long history.

The Pacifica Quartet tours extensively throughout the United States, Europe, and Asia and performs in the world’s major concert halls. The ensemble can be also be heard on many of the nation’s most prominent radio broadcasts, including Chicago’s WFMT, Boston’s WGBH, New York’s WNYC, and American Public Media’s Performance Today and St. Paul Sunday. Having given highly acclaimed performances of the complete Beethoven, Mendelssohn, and Elliott Carter string quartets in recent seasons, the Quartet will perform the monumental Shostakovich quartet cycle in Chicago and New York during the 2010-2011 season. In 2011-2012, the Pacifica will take the Shostakovich cycle to London’s Wigmore Hall and will also present the complete Beethoven cycle at New York’s Metropolitan Museum of Art.