THINKING IN A NEW WAY—Overcoming Habits (Part 5 of 6): Fleet Fingers — by Selma Gokcen

THINKING IN A NEW WAY—Overcoming Habits (Part 5 of 6): Fleet Fingers — by Selma Gokcen

“The body is like an instrument; it depends who is playing it.”  —F.M. Alexander

In the Alexander work I do, I consider there are five stages in learning to let go of the left hand fingers in cello playing so they can be free to race around the fingerboard, as well as play expressively. The hand must be soft and empty of all intention in approaching the string. If it has preconceived form and shape, then it cannot function except within the confines of this preconception. In connection with this work, I often ask my students the meaning in Zen Buddhism of “the empty hand that holds the spade.”

We can think of the fingers as the end of a long chain of joints starting with the upper arm ball and socket joint: the elbow, which is a hinge joint; the wrist, which forms the connection to the hand through 8 small bones arranged in two rows of four each; and finally the hand and fingers. The muscles controlling the fingers, such as bending at the finger joints, are located in the palm and forearm and are connected to the finger bones by tendons. Contraction of a muscle pulls on the tendon to move the finger. This is similar to a marionette where you pull strings to control movement. There are no muscles inside the fingers themselves.  This entire exquisite arrangement is brought to the string through the large musculature of the back  and the correct rotation of the large ball of the upper arm bone in the shoulder socket. The latter is a special minefield for cellists as often the arm is lifted by tightening the neck and raising the shoulder girdle (formed by the collar bones and the shoulder blades), which should simply rest quietly on the back. If you shrug your shoulders when you tell a joke, well…that’s your shoulder girdle moving up and off your back. At a recent masterclass I attended, every performing cellist raised their shoulder girdle to lift their arms. It is one of the most common gestures these days amongst cellists and causes no end of trouble.

If the fingers are the “foot soldiers” in the chain of command, then it makes sense to me to work on them last, addressing first the most basic gesture—raising the arm to bring the hand to the string. Once we find the inner quietness together, I bring the student’s attention to the length and width of the back and the supporting structure formed by the muscles which wrap around each side of the back; Alexander called them the “lifter muscles.” We of course include in our attention the entire head-neck-back relationship, the sitting bones of the pelvis, and the hips, knees, ankles and soles of the feet. I then will ask the student the following:

To raise the left arm, let it first hang quietly by your side.

Then turn the palm until it faces upwards.

With the palm still facing the ceiling, lift the arm until it is directly out to your left side. The shoulder remains quiet,  and you are thinking outwards along a line from inside your arm out to the tip of your little finger.

Then bring the left hand to the string.

This simple sequence tends to minimize the extraneous movement of the shoulder joint, but I still have to remind the student to tend to the head-neck-back relationship all along the trajectory of the arm movement itself.  This relationship comes first in our thinking and the movement of the arm is secondary.  Often we have to stop right at the beginning of the movement and start again, because the student has already made the decision to raise the arm in the old way.  It’s asking a lot, almost the impossible, as we have no experience in this kind of thinking in activity. Our mind deflects in an instant to the end result of the movement (the hand and fingers). Like a butterfly in a net, our habits of thought ensnare our best intentions. That’s why it took Alexander so many years to overcome his faulty vocal habits. He kept wanting to do the right thing, and yet that right thing, although it felt familiar and good, always turned out to be his unwanted habit.

The third challenge (after raising the arm and placing the hand on the string) is to learn to draw the string to the fingerboard from the back. Instead of applying vertical force to press the string down, thereby tightening the finger joints and meeting something hard and unpleasant—the fingerboard—we can learn to play off the bounce of the string. Bernard Greenhouse often demonstrated this very simple gesture of drawing back the finger towards the back, and in the process depressing the string with the minimum of force. We can think of the string and its bouncy quality, and use this quality to help us to sense movement in the hand. 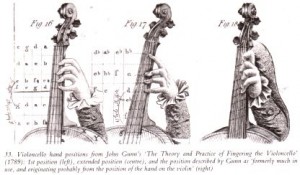 It’s worth mentioning here how free the largest member of the hand—the thumb—can be when the arm is not contracting unnecessarily. Cases of the thumb squeezing the back of the cello neck are almost never resolved fully unless the source of the tension is traced back into the larger muscles of the arm, neck and back. The thumb works in opposition to the fingers, and if it is tight, the fingers will be as well. I long ago abandoned the notion of a correct place for the left thumb. I like to think of a cellist’s hand like a pianist’s hand. How ridiculous to prescribe a place for the thumb when playing a keyboard instrument!  The thumb is constantly free to move. So should ours be.

Shifting and vibrato are much easier when the first three challenges are met successfully. I start with very large movements of the left arm. Touching the scroll, then the bridge and back again to the scroll, to ascertain that the large muscles of the back are providing the power to move arm. The biceps and triceps muscles of the upper arm are of course working, but not overworking. They have their place in the chain of command and are primarily involved in opening and closing the forearm, although the triceps is also involved in the rotating action of the shoulder joint. It is important that one member of this set of antagonistic muscles knows how to release when their partner has a job to do, so that we don’t end up tensing both muscle groups at once.

As we reduce the large movements of sliding up and down the fingerboard to create the vibrato, I always check that the upper arm has not contracted unduly, and that we still have good mobility inside the elbow joint. The elbow joint is the “Achilles heel” of all string players—that poor biceps tendon inside the elbow joint usually overworks in both arms. It makes the vibrato tight and the bow arm unable to play repeated notes quickly and fluently. Learning to allow that tendon to release and move properly takes up a major part of my work with my string students.

We work together to “let the spine light up the fingertips,” as the great teacher of the Alexander Technique, Patrick Macdonald, used to say. The energy flowing through the spine can galvanize our sound, electrify its expressive potential and create a thrum of vibration in the listener. I have been in the concert hall when the pianist Vladimir Horowitz performed and the vibrations practically lifted the audience out of their collective seats. I am not speaking about volume, but something much finer, a sound which is a vessel for a higher quality of energy—not easy to describe, but always memorable.

About the Author: Selma Gokcen

Selma Gokcen, born in America of Turkish parentage, has received critical acclaim for her imaginative programming.   Along with Bernard Greenhouse and Jonathan Kramer, she presented a programme at London’s South Bank Centre, in New York and at the Kennedy Center entitled Pablo Casals: Artist of Conscience, celebrating the life and music of the legendary cellist.

Ms. Gokcen has performed with L’Orchestre de la Suisse Romande, the Presidential Symphony in Ankara, the Istanbul State Symphony Orchestra, the Houston Symphony, the North Carolina Symphony, and the Aspen Philharmonia, among others. Her recital appearances have taken her to such cities as Boston, New York, Washington, D.C., Los Angeles, Palm Beach, Charleston, S.C., and to Belgium, Italy and Turkey. In South America, she has toured under the auspices of the U.S. State Department. She has concertized in Australia and New Zealand, and given master classes in Sydney, Melbourne, Auckland, Wellington and Christchurch.

In addition to solo appearances, she is an accomplished chamber musician and has participated in the Chamber Music West Festival in San Francisco, the Southeastern Music Festival, the Hindemith Festival in Oregon, and the Accademia Chigiana in Siena.

Ms. Gokcen holds the Doctorate of Musical Arts, as well as a Bachelor’s and Master’s degree from the Juilliard School, where her teachers included Leonard Rose, Channing Robbins, William Lincer and Robert Mann. She was awarded a First Prize from the Geneva Conservatory of Music as a pupil of Guy Fallot, and also studied privately with Pierre Fournier. In 1999 she was chosen by one of Spain’s greatest composers, Xavier Montsalvatge, to record his complete works for cello. She has also recorded Songs and Dances in Switzerland for the Gallo label.

In 1988, Ms. Gokcen became interested in the Alexander Technique, prompted by a lifelong fascination with the roots of habits and the difficulties of modifying them.  Students often entered her cello studio seeking changes but unable to resolve their problems.

Ms Gokcen was qualified as a fully-fledged teacher by the Society for Teachers of the Alexander Technique in 1998.  In September 2000 she was appointed to the faculty of the Guildhall School of Music and Drama, where she is also a professor of cello. She works with string, wind and brass players, singers and composers. She also incorporates her Alexander Technique teaching as part of her cello studio.

The Alexander Technique embraces what is today called holistic thinking–an indivisibility of the mind-body connection and the awakening of awareness of what  Alexander called the “use of the whole self”, which affects our functioning in all our activities, especially  the highly complex skill of music-making.  It is particularly useful in addressing breathing, coordination, and muscle tensions. Most importantly, the quality of attention developed through the practice of the Technique can transform a musician’s relationship with their instrument and their audience.

Selma Gokcen is also the co-founder and Co-Chair of the London Cello Society.